salient aspects of Art Forms, Literature and Architecture from ancient to modern times.

Discuss-  This is an all-encompassing directive which means that we have to write in detail about the origin of temple architecture in India, how they evolved over time different temple styles in India, their main features etc.

Introduction – Mention the reasons for building the early temples and mention the bhakti movement which laid down the model temple architecture for the coming millenia.

Conclusion- Mention the regional variations which produced exquisite samples of beauty but more or less the temple architecture in India followed a similar plan and evolution.

Classification of temples into Nagara, Dravida and Vesara :-

The question expects us to discuss the principle objective of the foreign policy of USA which has guided it’s world view. Thereafter, the reasons why US intervened in Vietnam and the impact of it.

Introduction – Mention that the events in the question happened during cold war and it was a period when two superpowers were playing the game of one-upmanship.

Body – discuss the key contents of the foreign policy of USA in 20th century and post 2nd world war which guided it’s outlook – can look at Woodrow wilson’s 14 point agenda. Thereafter, mention the reason that led to USA’s involvement in Vietnam – Domino theory. Finally, discuss the impact that Vietnam war had on USA and the world.

Conclusion – Mention that USA believed that it had to play the role of global policeman which is being challenged with the emergence of multiple superpowers today.

America’s foreign policy has changed over time reflecting the change in its national interest. As a new nation after the Revolutionary War, America’s prime national interest was to maintain its independence from more powerful European countries. Through the 19th century, America concentrated on creating a nation that spanned the continent, and it avoided foreign entanglements. Once industrialized and more prosperous, it began looking for foreign markets and colonies.

By the turn of the 20th century, the United States had become a minor imperial power, fighting a war with Spain for Cuba and the Philippines and annexing Hawaii and several other territories. World War I engaged the United States in European affairs, but after the war, a wave of isolationist feeling swept the country. Refusing membership in the League of Nations, America turned inward once again.

Emerging from World War II as the most powerful economic power on Earth, the United States changed its foreign policy dramatically. It took the lead in founding the United Nations. It invested billions of dollars through the Marshall Plan to help strengthen war-devastated European democracies. It created a system of alliances, including the North Atlantic Treaty Organization (NATO).

Central to America’s foreign policy in the post-war period was the containment of the Soviet Union and communism. During the Cold War, the United States and its allies competed with the Soviet Union and its allies militarily, economically, and ideologically. Both sides created massive military forces and huge stockpiles of nuclear weapons. Although the two superpowers never went to war, the policy of containment led the United States into the bloody Korean and Vietnam wars.

Reason for US to intervene in Vietnam:-

o   The most immediate effect of the Vietnam War was the staggering death toll.

o    In 1969, around 1,034,300 hectares of forest was destroyed. “Agent Orange“, one of major herbicides used, has left a serious ecological and human impact on Vietnamese people’s lives.

Lateral entry in government service is an idea often discussed and has finally been implemented. Analyzing this decision is important for mains.

The question expects us to discuss the pros and cons of the move and express our opinion on whether lateral entry is much needed at present.

Introduction – Mention the advertisement by GoI regarding lateral entry.

Body – Discuss the pros and cons of the move. In pros section analyze the recommendations of the various committees which have analyzed this question, our past experiences, requirement in modern economy where state has taken the key seat, in depth knowledge of subjects for policy making etc. Discuss the cons such as lack of on ground experience, little idea about the administrative leviathan etc. Present your view on whether the move is a right one considering the time we live in.

It is a very good idea:-

The idea is criticized due to the following reasons:-

4) Analyze the feasibility of holding simultaneous election in India in the near future? (250 words)

The question of feasibility of simultaneous elections is a hotly analyzed topic currently and important for Mains.

The question demands us to discuss in detail the feasibility of holding simultaneous elections from various perspectives – constitutional, functional etc. We also need to provide a way forward.

Introduction – Mention that the question  of simultaneous elections is a hotly discussed topic in indian polity. Explain what do you mean by it.

Conclusion – Present a fair and balanced view and the way forward

The idea is good in principle but there are several practical difficulties as follows:

Topic: Structure, organization and functioning of the Executive and the Judiciary
Ministries and Departments of the Government; pressure groups and formal/informal
associations and their role in the Polity.

5) Discuss the reasons behind high prevalence of child labour in India. Also, discuss the legal mechanism in place to address the issue.(250 words)

The question wants us to write in detail about the reasons behind high prevalence of child labour in India and it wants us to simply describe the legal mechanism in place to address the issue.

Discuss- We have ro write at length about both the parts of the question- reasons behind as well as legal mechanisms in place.

B, discuss the legal mechanisms in place to address the issue.

Conclusion- Mention the need to curb the problem of child labor in India and also suggest a few points as to what should be done in this matter. 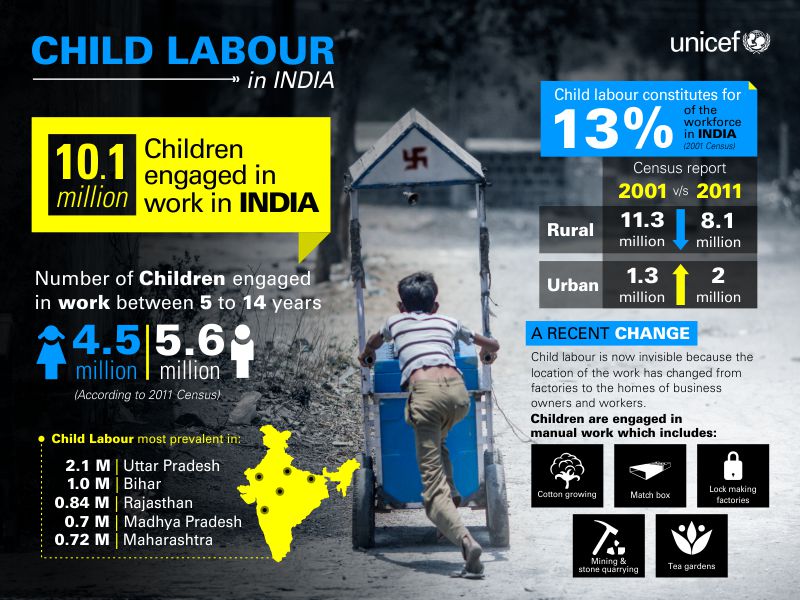 Topic – Major crops cropping patterns in various parts of the country, different types of irrigation and irrigation systems storage, transport and marketing of agricultural produce and issues and related constraints; e-technology in the aid of farmers

6) Indian agriculture has entered the era of permanent surpluses, which is further worsening the condition of the farmers. Critically Comment.(250 words)

Although Indian agriculture suffers from several perennial problems, permanent surpluses have only been a recent phenomena. Instead of ameliorating the condition of the farmers, the phenomena has further hurt the farmers. The issue is related to GS 3 syllabus under the following heading-

Major crops cropping patterns in various parts of the country, different types of irrigation and irrigation systems storage, transport and marketing of agricultural produce and issues and related constraints; e-technology in the aid of farmers

The question wants us to express our knowledge/ understanding of the issue and present our opinion. We have to explain how Indian agriculture has entered the permanent surplus era, what impact it has on farmers and what should be done in this regard.

Critically Comment- We have to express our personal opinion and understanding of the issue backed by adequate and proper/valid justification.

Introduction – Explain the meaning of the term permanent surplus  in agriculture.

Conclusion– Express your opinion in the form of what should be done in this matter- e.g providing proper knowledge inputs to farmers etc.

How this hurts farmers:-

TOPIC: Ethics and Human Interface: Essence, determinants and consequences of Ethics in human actions; dimensions of ethics; ethics in private and public relationships.

Public/Civil service values and Ethics in Public administration: Status and problems; ethical concerns and dilemmas in government and private institutions

7) Discuss the  ethical frameworks through which the act of suicide could be debated.(250 words)

Ethics and Human Interface: Essence, determinants and consequences of Ethics in human actions; dimensions of ethics; ethics in private and public relationships.

Public/Civil service values and Ethics in Public administration: Status and problems; ethical concerns and dilemmas in government and private institutions

The question wants us to mention and describe different ethical frameworks ,which debate the ethical aspects of the act of suicide. We have to discuss the individual frameworks and their main philosophy/ questions/ pursuits etc.

Discuss- This is an all-encompassing directive which means that we have to write in detail about the key demand of the question.

Introduction– Give a simple ( preferably legal) definition of the act of suicide.

Discuss in points, different ethical frameworks through which the issue of the act of suicide can be debated.

Mention and discuss the theologian, libertarian, consequentialist, Kantian frameworks and what are their key philosophies. What question they ask and what answers they seek.

Conclusion– Form a fair and balanced  personal opinion the overall issue of suicide, based on your understanding, convictions and more importantly the above-held discussion.

Suicide is a prevalent and persistent feature of human society. According to the WHO, approximately 800,000 people per year commit suicide. Suicide is the intentional and voluntary taking of one’s own life. However the point is that describing an act of self-killing as “suicide” is not always straightforward as sometimes people do it voluntarily and sometimes they are forced to take extreme action due to the circumstances imposed on them.

There are four different frameworks for thinking about the ethics of suicide:

The theological framework, bases its ethic of suicide on theological premises. The typical theistic view being that either life is a gift from God that we cannot revoke or we are God’s property/creation and in choosing to end our own lives we would violate his authority over us. This means that suicide is always and everywhere ethically wrong.

The libertarian framework is based on libertarian moral and political theory. Libertarians typically believe that we have a natural right of self-ownership, A permissible attitude toward suicide follows from this. If we choose to end our lives, that is our right. The rights of others and the duties one owes to them may count against the permissibility of suicide. For instance, a parent’s caregiving duties toward their child would seem to block the permissibility of suicide.

Therefore the big problem for all consequentialist theories is that they can lead to counterintuitive conclusions. For instance, if killing an innocent person would help to avert mass social unrest and upheaval, then it seems like the consequentialist should do it. This is despite the fact that the innocent person has done nothing to deserve this treatment.

The Kantian framework is a non-consequentialist approach, focusing on our duties towards ourselves and others, and appealing to the concept of dignity. Kantian view is usually thought to imply that suicide is impermissible. The simplest argument for this is that killing oneself is incompatible with respect for one’s dignity.