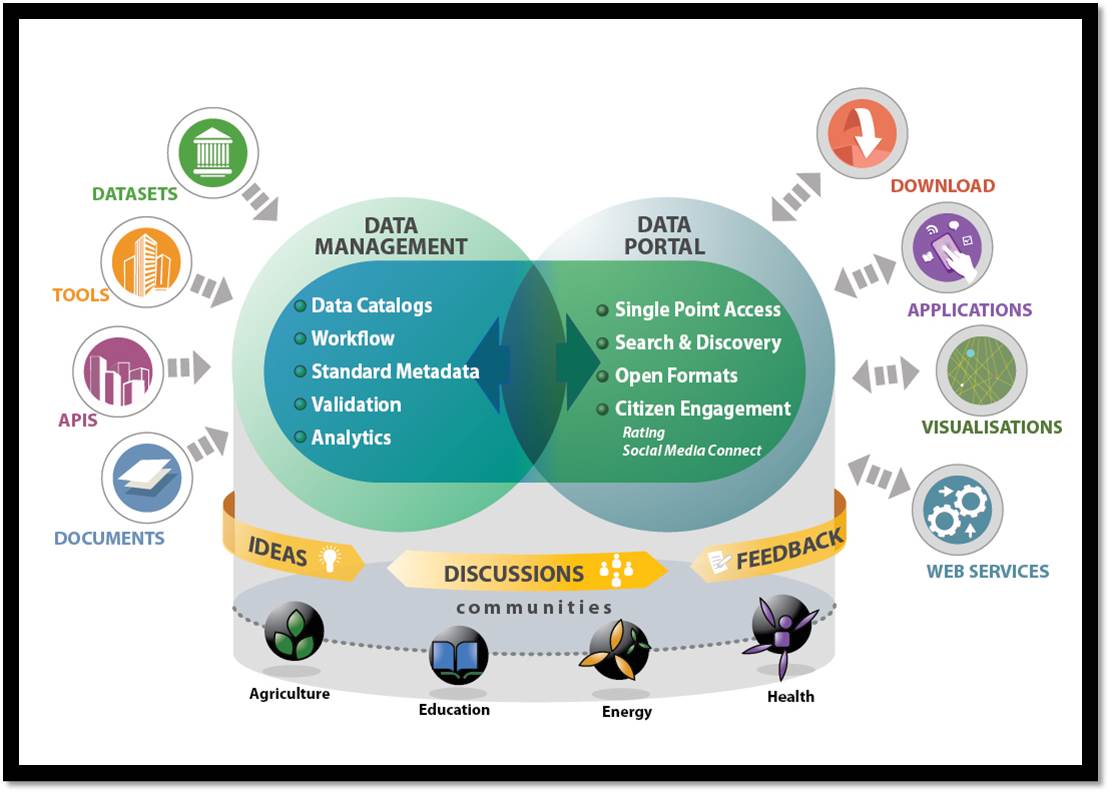 The application of data and their assimilation with solving social problems, enabling better governance and powering elected governments to serve their citizens better is ushering in a new revolution.

When Artificial Intelligence is coupled with open data, a real paradigm shift begins. With choice and information-sharing now redefining consumer behaviour, every company is looking to embrace or at least look like it is embracing the new paradigm of data-driven innovation. The “audacity of hope” for a country of a billion aspirations is yet to bear result.

What is Open government data?

Open government data means publishing information collected by the government in its entirety, such as government budgets, spending records, health-care measures, climate records, and farming and agricultural produce statistics. If the advent of data-driven business models was a watershed moment, this is the real pot of gold.

Research by PwC in Australia estimated that open data can add an additional 1.5% to the country’s GDP. In the Indian context, this could conservatively translate to about $22 billion.

A case in point here is Transport for London, a public utility, which has digitised and shared only about 80 data sets, yet this has led to the creation of multiple technology applications for city transport and maps, unlocking estimated economic benefits and savings for the city to the tune of £130 million.

While concerns around privacy and consent have been well articulated, open government data is a silent but powerful movement unfolding globally. Over 100 governments have already signed a charter to proactively share data collected by various government departments, for public consumption.

Fostering collaboration, enabling creative innovations and collective problem-solving are giving accountability and transparency a shot in the arm.

“Datafication” of businesses has also brought to the fore the criticality of developing data management, storage and privacy laws.

For Instance, The European Union with its General Data Protection Regulation has been a front-runner and other countries, including India, have also adopted a collaborative model to develop privacy laws, which includes deliberations with creators of data (the consumer) and users (corporates).

Unfortunately, the potential of this national asset is being grossly underutilised. We need to act on it without further delay for three basic reasons.

Data points around progress in literacy rates, demographic data and density of educators can help develop customised solutions for villages. Similarly, information on availability of facilities in public hospitals, current occupancy rates, hospital and demographic data can pave the way for curated health-care applications. The cases are endless and technology can have a multiplier effect.

The power of open data has hardly been lost on the Indian government. The Ministry of Electronics and Information Technology has made some laudable efforts, including a policy around open data.

The Open Government Data (OGD) Platform India has been set up by the National Informatics Centre (NIC) in compliance with National Data Sharing and Accessibility Policy (NDSAP) 2012. The objective of the policy is to provide proactive access to government owned sharable data along with its usage information.

India currently houses more than 1.6 lakh data resources and has published over 4,015 application programme interfaces (APIs) from across 100-plus departments. As a result, India’s global ranking by the Global Open Data Barometer has jumped.

This is a good start but not enough. A closer analysis of the Open Data project shows good intent but sporadic execution. Hence, while India publishes data points, very little of it is getting utilised by data consumers, scientists and corporates. Naturally, the socio-economic impact is limited.

Proposed a 5C framework can able to address the current underlying execution gaps of the Open Data project, and believe it can help India achieve its stated objectives:

To double farmers’ incomes by 2022 and provide universal health coverage and micro loans to micro, small and medium enterprises, promoting Digital India, start-up India, Make in India, even women empowerment among others.

The time is now ripe for the government to create a data-driven governance architecture by building digital trust in the economy and its intent.

The government is committed to make best use of big data in establishing rule of precision governance. While doing so every care would be taken to ensure that strict privacy rights of individuals are protected. However, unauthorised use of data would be dealt with iron-hand to ensure that nothing comes in the way of making data-analytics a national movement.

The big data analytics should focus on poor & under privileged and facilitate inclusive growth. While aiming at taking lead in data analytics it must be ensured that technology is inclusive, affordable, transformative & developmental. OpenGovDataHack being taken up in states would catalyse further start up movement.