Insights into Editorial: About a small Mauritian island 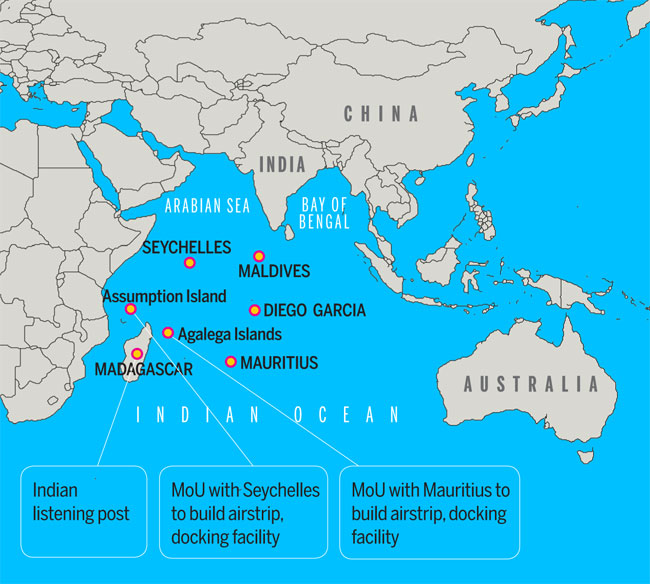 In 2015, Prime Minister Narendra Modi and his Mauritian counterpart Anerood Jugnauth signed an agreement that allows India to “develop infrastructure” on the Mauritian islands. The phrase is a euphemism for the building of military bases, which India is doing not only on Agaléga but also on Assumption Island (Seychelles).

Recently, a group of Mauritians, Rodriguans and Agalégans met to form the Koalision Zilwa Pou Lape (Islanders Coalition for Peace). They have called for the Indian Ocean to be declared as a “zone of peace”.

Mauritius is the largest source of FDI into India, since multinational corporations have been able to take advantage of the India-Mauritius Double Taxation Avoidance Treaty and the lax tax regime to avoid paying taxes. After having given over Agaléga, Mauritius signed an amended treaty on taxes and by 2019 will effectively lose its status as the main funnel for FDI into India. Agaléga, which was the price for the extension of the treaty, will now be surrendered without benefit.

Three hundred people live on the small Mauritian archipelago of Agaléga. They watch as their home is turned slowly into an Indian naval base. There is little that they can do. The government of Mauritius knows that there is far more to be gained from India than from the people of Agaléga.

Mauritius is one of the main routes for foreign direct investment (FDI) into India. It earns Mauritius a considerable fortune in fees as money that is enough for Mauritius to renege on its pledge to its own citizens.

The agreement covers within its purview our shared efforts in anti-piracy operations, and enhanced EEZ surveillance to prevent intrusions by potential economic offenders including those indulging in illegal fishing, poaching, drug and human trafficking.

In a recent FTA, two trading partners cut or eliminate duties on majority of goods besides liberalising norms to promote services trade and boost investments.

According to experts, India may not get huge benefit in goods sector as Mauritius is a small market, but services sectors such as IT and tourism hold huge potential to enhance economic ties.

Indian Ocean as a Zone of peace:

The idea of the Indian Ocean as a demilitarised area is not anachronistic. In 2014, National Security Adviser Ajit Doval evoked the idea of the zone of peace in his speech at the Galle Dialogue in Sri Lanka. What did he have in mind is: A Chinese submarine had docked in Colombo, which raised the hackles of India.

Solidarity with the people of Agaléga, as well as those in Chagos (Diego Garcia) and Assumption (Seychelles), animates Islanders Coalition for Peace group. They have called for the Indian Ocean to be declared as a “zone of peace”.

The “zone of peace” idea takes us back to the 1970 Non-Aligned Movement (NAM) summit in Lusaka, Zambia. Various NAM members called upon all states “to respect the Indian Ocean as a zone of peace from which Great Power rivalries and competition, as well as bases” be excluded.

For the U.S., the “zone of peace” was a “very dangerous idea”. France, still a colonial power, did everything to stop this idea; La Réunion, south-west of Mauritius, became the centre of French naval military operations in the Indian Ocean after Djibouti won its independence from France in 1977. Nonetheless, the UN General Assembly voted a resolution in 1971 on the Declaration of the Indian Ocean as a Zone of Peace.

Zone of peace promotes the economy of this Indian Ocean countries as these are heavily dependent on tourism. The country receives about 3-4 lakh tourists a year a year, roughly three times of its population. The direct share of tourism in the economy 27 per cent, which goes up to 62 per cent if the indirect contribution is factored in

In its “string of pearls” policy, China has built significant relations across the Indian Ocean, from Gwadar (Pakistan) to Hambantota (Sri Lanka) to Kyaukpyu (Myanmar). A rattled India wants to exert itself in the same region and has developed reciprocal agreements with Australia, France and the U.S. to take advantage of bases as far flung as Cocos Islands (Australia) and La Réunion (France).

Nuclear-armed ballistic missile submarines from India (Arihant) and from China (Song, Shang and Jin) will soon ply these waters. They will join the Ohio class (U.S.) and the Rubis class submarines (France) that already operate here.

China and India are bit players in the Indian Ocean. The main naval facilities here are held by the U.S.; their own string of pearls runs from Bahrain to Singapore. In the middle of this arc is Diego Garcia, from where Afghanistan and Iraq were bombed.

Focus on the rivalry between China and India misses the long-standing problem concerning the U.S., which was the focus of the Lusaka resolution. In Lusaka, the NAM resolution said this base constituted “a direct threat to the independence, sovereignty, territorial integrity and peaceful development of States of the region”. It remains a threat in exactly this way.

The Islanders Coalition for Peace statement evokes the full measure of the NAM statement but also goes beyond that. It speaks of the need to recognise the people of the Indian Ocean as one people with a “common past and a common destiny”; where the waters are treated as common property rather than as corporate and military property.

Many small islands in Indian ocean have been historically exploited as Naval bases and there have been genuine apprehensions about India also building a Naval Base there.

These stations will be eventually integrated with India’s coastal monitoring network to give wide coverage of the Indian Ocean region. India will not only have to more creatively reimagine its strategic geography but also evolve new terms of engagement with its neighbours in the Indian ocean terms which reflect the reality of our times in which both India and its neighbours can have a stake in each other’s success.

Indian ocean region is the primary area of concern for India. Securing its position here is vital before venturing elsewhere. For India, geographically the area of concern, and so the area of focus, should remain the IOR, stretching from the Gulf of Aden to the Strait of Malacca.

While reiterating its commitment to upholding the established laws of the global commons, New Delhi should not go adrift in the larger Indo-Pacific. As more powers make inroads into this strategically crucial space, India must consolidate its position and not expect others to do its job, for it would only mean ceding space in the long run.

India, with its strong intelligence network, will also be helpful in maritime law enforcement by Mauritius and Seychelles.

While declaring support for India’s maritime security plans, there is need to pointed out that small nations are equally important in the contemporary world order and need to be taken seriously for the sake of preserving the security and order.