Insights into Editorial: Paper chase: The need to review use of VVPATs 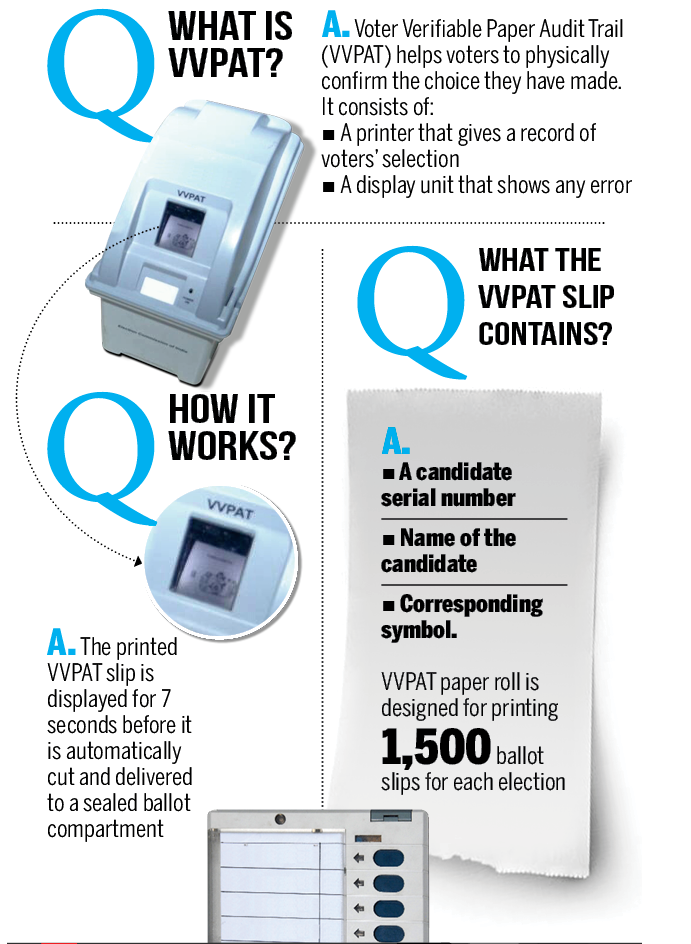 Recently, there is an high incidence of glitches in the Voter Verifiable Paper Audit Trail (VVPAT) machines in by-elections should be a major cause of concern for the Election Commission of India.

Fresh polling had to be ordered in dozens of booths in Uttar Pradesh and Maharashtra as a consequence.

The Voter Verified Paper Audit Trail is a method that provides feedback to voters.

When a voter presses a button in the EVM, a paper slip is printed through the VVPAT.

VVPAT is a machine which dispenses a slip with the symbol of the party for which a person has voted for. The slip dropped in a box but the voter cannot take it home.

Concerns in implementation of VVPATs:

since the implementation of the VVPAT system last year, machine malfunction and subsequent delays in polling have been recurring issues. Close to 4.2% of the VVPAT machines deployed in the Karnataka Assembly elections developed glitches during the testing as well as polling processes. The overall fault rate was as high as 11.6% in the by-elections held in four parliamentary and nine Assembly constituencies.

The ECI has suggested that these machines were more prone to malfunctioning due to their sensitivity to extreme weather conditions and exposure to light. It also blamed the relative inexperience of polling officers handling them, compared to the ballot and control units for the electronic voting machines (EVMs) that have been in use for much longer.

The technical committee of the ECI is now faced with a challenge to ensure that the VVPAT machines hold up, with the general election due next year in the hot summer months. The VVPAT was added to the EVM to audit the voter tallies stored in the machine.

The use of these VVPAT machines, which are adjuncts to the ballot and control units of the EVMs, has added to the complexity of an otherwise simple, single programmable-chip based system, and rendered it prone to more glitches.

There is enough empirical evidence to show that EVMs have eased polling and helped increase voter turnout since being put to use. But in using VVPAT machines to reassure sceptics about an election’s integrity, the ECI has introduced a new element, and cost, to the process.

It is mostly inadequately trained election duty staff and not the Voter Verifiable Paper Audit Trail (VVPAT) machine that have played truant in elections, a key member of the Technical Expert Committee that advises the Election Commission (EC) on the efficacy and readiness of the machines.

Therefore, More intensive training and increasing election staff ’s familiarity with the new machines are likely to address the teething troubles that are currently at the fore.

A combination of safeguards ensures that these machines are fully tamper-proof. Broadly, these can be summed up in four categories:

Considering these challenges, the ECI should consider deploying the VVPAT machines in a limited, statistically significant, randomly chosen set of polling booths. This will reduce the possibility of glitches affecting the polling process as well-tested machines could be deployed (with enough replacements also handy) to such booths.

The current verification process, after all, only involves the counting of VVPAT slips by randomly choosing one booth from each constituency and this check should not be affected drastically by the new method.

The EVM, just as any other machine, needs to constantly evolve in order to remain secure and workable under any condition while at the same time keeping its operations simple. The introduction of the VVPAT tends to enable another layer of accountability to the EVM.

Therefore, It is important for Election Commission to regain trust and confidence of all stakeholders in the election system in India.

Introduction of VVPAT is an appreciated move. However, lacunae in VVPAT technology should be immediately addressed. Measures include making it independent of battery, include the usage of sustainable inks and reducing sensitivity to heat and light. Employment and proper training of workforce to manage errors and technological snags.

The EC announced that it will count V-VPAT slips up to a definite percentage. A proper statistical method should be deployed for while deciding on the required proportion of tallying V-VPAT with EVMs.

At present it only involves randomly choosing booths. Invest more to upgrade technology.

Rather than moving to paper ballot system of election, the focus should be on improving the efficiency, credibility and transparency of the EVM-VVPAT enabled electoral process.

Transparency in every aspect of elections is a fundamental necessity. Especially with a multiparty democracy and competitive politics at its rage always it is important for ECI to ensure people are assuring the clean and Transparent process in elections.