Hi friends, I am Pratham Kaushik (Rank 5 CSE 2017). My score in Geography optional is 327 (166+161). Here I am presenting my strategy for Geography. I’ll try to be specific as Geography syllabus is vast and questions are getting increasingly unconventional every year. My suggestions, whether books or coaching, are not endorsements. I hope this article can exhaustively cover all the aspects of Geography preparation. 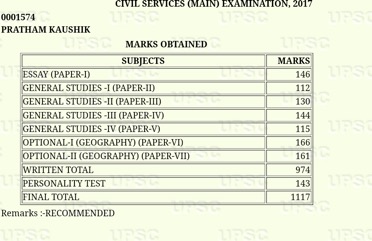 Sources and preparation methodology for Paper 1:

This was my strongest topic in the syllabus. In fact, it was this topic only which helped me tackle the difficult Paper 1 and score 166 marks.  I have seen that even in earlier years, people with good marks unarguably had a strong grasp over this topic.

I would recommend the following path to cover this topic.

This will equip you to write extremely good answers as you’ll have precise definitions, theories, and lots of examples given originally by Geographers in their studies. Use the original quotes by Hartshorne, Febvre, Semple etc alongwith the names of their thesis or books. Use chronological flowcharts while answering questions.

Also prepare topics like Languages, Religions, Cultural Regions and HDI, and link these with Geographical Thought. Example – Link HDI with Welfare Geography; Languages and Religion with Diffusion and Cultural Landscape of American and German Geographers.

This topic is crucial as it is scoring and easy but needs good presentation. Prepare exact definitions of terms like Conurbation, Metropolitan region, Slums, Satellite towns, RUF etc along with the Human Geographers who have given these concepts. Use diagrams in settlement geography and maps in population geography as much as possible. Have some statistics handy so as to make the answer on Population Geo more effective.

Terms in syllabus such as Social well-being and quality of life, Population as social capital etc should be specifically prepared with names of thinkers, examples from present world etc.  with help from any classnotes and internet. Both Quality of life and Social Capital were asked this year. Questions from these topics might be repeated and diversified in coming years.

It is the second most important topic after Geographical Thought. It has ample scope to be very presentable with lots of diagrams, flowcharts, maps in many questions (Rimland Heartland Theories, Von Thunen, Boundaries and frontiers etc), names and books of Geographers, few examples from the present world like CPT, Von Thunen, Rostow etc.

Read models and theories independently from Majid Husain and then try to link them to their original sub topic.

Always, always attempt the question from this topic using all the above for better presentation, as knowledge and content will be same with everyone. Prepare pointers and short notes for each model and theory and learn each postulate by heart.

Systems Analysis is a becoming a favourite of UPSC and questions are getting more diverse. Example: Geographical Systems, Application of System Analysis, Importance of system analysis etc. Prepare these from any classnotes, the above mentioned book and some help from internet. Once prepared, do not look for excessive value addition in content and try to enrich your answer by flowcharts of systems.

Sources and preparation methodology for Paper 2:

Some ways to simplify are: a) Brackets such as Low, Medium and High, b) Below, At and Above National Average, c) Shading a particular region, d) Flow maps depicting migration, trade patterns, diffusion of language from its hearth etc. example – Make an arrow of more width directed from China to India and an arrow of lesser width from India to China depicting the trade deficit. Also you can use an opening arrow over the map to show expansion of something and closing arrow to show reduction.

Maps in Geography are used for explanatory and indicative purposes. Maps made in exam hall are crude, rough and indicative and can be made using the PEN itself. Try practicing maps at home and draw partial maps wherever required (Example – To show Indira Gandhi Canal, draw only western India, for Indo China border disputes draw only the Northern and NE region.)

Always label maps and diagrams and try to replicate the original boundaries of the map of India. Also have a look at the boundaries of states in case you need to draw a map of any state. In that case Maharashtra and MP should not look like rectangles.

How to enrich your answers?

Example – A question on difference between Himalayan and Peninsular Drainage can be enriched by mentioning the difference in cropping pattern and industrial use of drainage water at the end. This also gives the answer an administrative orientation which is marks fetching. A pure geographical orientation is required in only a few topics. Rest of the paper, especially Paper 2 should be attempted by an administrative – geographical perspective.

Example: Examine the role of small towns in the regional development process.

This question can easily be structured and answered by the above rule. If you start writing without a structure, even such an easy question will not fetch good marks.

Pick the topics of the syllabus to write the role of small towns:

Population & Settlement – Small towns can act as counter magnets, reduce the burden on big cities and reverse migration i.e. Small towns as solution to the problems of Urbanisation

Industries – MSME, footloose industries in small towns, availability of labour for small enterprises in the town itself, relatively cheaper labour (I wrote the example of mini steel plants in small towns for decentralisation of Iron and Steel industry, and found the exact same question in Paper 2.)

Transport and Trade – Access to both raw material (agricultural and industrial) and market through transport, role in road transport complementing rail transport, Trade towns emerging into big cities such as Surat

From Physical Geo part of Paper 1, write points on Environment (role of small towns in environmental conservation) and Biogeography (Agroforestry and social forestry in small towns).

Thus Rule 2 is also satisfied, as both human and physical dimensions are covered.

Add a map of NCR region showing the small towns in vicinity, draw arrows showing the flow for, say migration, add some specific examples, and the answer will be diverse and comprehensive.

Benefits – Excellent content coverage in 500+ program from each sub topic of the syllabus, question paper closely resembles UPSC paper, answer booklet is in UPSC format, easy for revision as approach is question – answer based, it can even substitute your coaching class copy for most topics.

Cons – Answer copies are not checked by Sir himself though he reviews them, but you can always go to him with the paper to ask anything.

Pros – Approach is excellent, the way he deals with certain topics is good, his test series class notes are good (if you don’t attend the classes, find a way to get these from the market and have an overview, certain topics will be well covered).

Cons – Answer copies are not checked by Sir himself though he will review them if you meet him personally, specific topics of syllabus are covered only as the program is meant as test series and not classroom coaching.

Pros – Shamim Sir checks the papers himself and marking is optimum, Simple approach towards difficult questions.

Cons – Question paper resemblance to actual UPSC paper is low, does not build much on content as the program is a test series and not classroom coaching.

I hope I have covered all aspects and my suggestions help you score good marks in Geography. I can be reached at mpratham3@gmail.com for any specific queries. Please mention Geography Query in the subject. All the best.