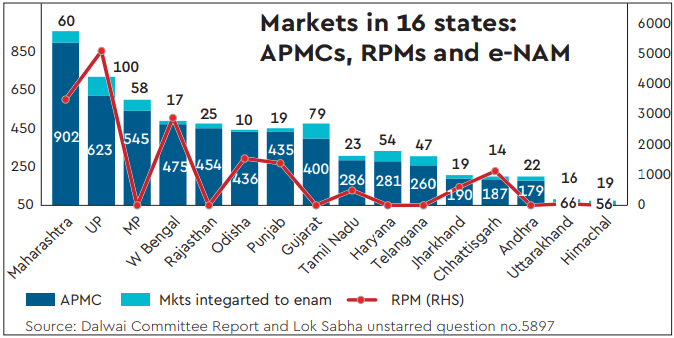 Single National Agriculture Market (NAM) in the country, with a view to enable farmers to get a better price and for consumers to pay a lower price for agri-produce, a win-win situation at both ends of agri-value chains.

NAM: A Game Changer for Market:

NAM addresses these challenges by creating a unified market through online trading platform, both, at State and National level.

It promotes uniformity, streamlining of procedures across the integrated markets, removes information asymmetry between buyers and sellers and promotes real time price discovery, based on actual demand and supply, promotes transparency in auction process, and access to a nationwide market for the farmer, with prices commensurate with quality of his produce and online payment and availability of better quality produce and at more reasonable prices to the consumer.

Agri-Market reforms in the Past:

Some reforms in domestic agri-markets were attempted, when a model Agricultural Produce Marketing (Regulation) Committees (APMC) Act 2003 was suggested to states. As many as 22 states have adopted it in some form, yet it failed to transform the agri-marketing structure in India.

Why market integration is important?

The Government came out with the APLM 2017, or the Agricultural Produce and Livestock Marketing (Promotion and Facilitation) Act.

It shifted the focus from regulation (under APMC), to promotion and facilitation (under APLM), setting the right tone for agri-marketing reforms.

The Dalwai Committee on Doubling Farmers’ Income has pointed out that the share of farmers in consumer’s price is very low; it generally varies from 15 to 40 per cent. Studies conducted by the International Food Policy Research Institute and World Bank have confirmed this. The dominant role of middlemen among others is primarily responsible for farmers not realising a reasonable price for their produce, lowering farm income and profitability. This was recognised by the 12th Plan’s Working Group on Agriculture Marketing (2011).

The agriculture markets are crowded with middlemen and commission agents. As pointed out by Ramesh Chand, in Punjab, there are as many as 22,000 commission agents and innumerable middlemen in each market. According to Ashok Gulati, former chairman of the Commission for Agricultural Costs and Prices, commission agents in Delhi charge exorbitant fees ranging from 6 per cent to 15 per cent.

But, these 585 mandis brought only 90.5 lakh farmers onto the platform, which is less than 7% of the 14 crore Indian farmers.

But, the value is only about 2% of India’s total value of agricultural output.

As per the Department of agriculture cooperation and farmers welfare, most of the reported transactions are intra-mandi. Inter-mandi and inter-state trading on the platform are minimal.

What this means is that the states on e-NAM have not been able to provide farmers with better price discovery in other mandis of the same state or across states. The department also acknowledges that e-payment facility is not available in most mandis, and that there is no competitive bidding reported in these states.

This clearly implies that the monopoly of the APMCs continues unabated even in the 18 states/UTs, and the aim of creating a truly unified NAM with an efficient price discovery mechanism is still a far-fetched dream.

Therefore, the following steps are taken in a concerted manner:

This would require significant investments, and changes in state APMC Acts. This is feasible, provided PM Modi takes a lead and presses for it, bringing uniformity in agri-marketing rules and infrastructure in all the states. Roping in the private sector for investments would create jobs and promote efficient agri-value chains.

The real challenge is to change the nature of the market – a single unified pan-India market. We need to devise a set procurement model along with the States but we also need to link it to the public distribution system. With better prices, what is also important is better access to the market. States need to support some of the reforms and be a part of the e-NAM initiative.

e-NAM could help to break this logjam – it is a virtual market.

The Agriculture ministry will have to strengthen e-NAM platform with new and user-friendly features by rolling out MIS Dashboard for better analysis, BHIM payment facility by traders, mobile payment facility by traders, enhanced features on Mobile App such as gate entry and payment through mobile, integration of farmer’s database, eLearning module in e-NAM website etc.

To double farmers’ income by 2022 and that farmers should become part of mainstream development. The objective was to bring more transparency and competition and provide remunerative prices to farmers. Keeping in view the need of making marketing of commodities easier for farmers.