Insights into Editorial: Natural capital in the 21st century 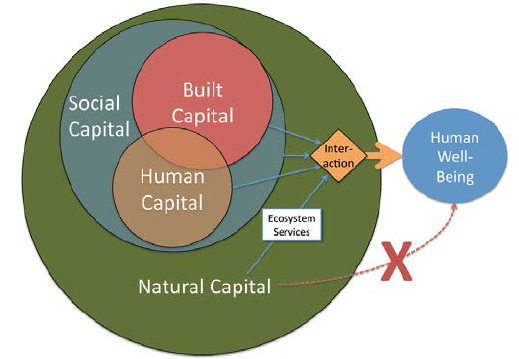 Context of Natural Capital in India:

A few years ago, India suffered a cost of $550 billion, about 8.5% of GDP, due to air pollution, according to a World Bank report. The cost of externalities such as water pollution and land degradation were possibly far higher.

Through commodity exports, we effectively transfer natural capital to our trade partners, raising the risk of desertification and land being degraded significantly.

Within a century, our food production could see a loss of 10-40% if these trends continue. So when we crow about GDP growth, we should also consider the decline in natural capital in our national accounts.

Ecosystem services science (ESS) is inherently an integrated, transdisciplinary science that is concerned with the way these four forms of capital assets (built, human, social and natural) contribute to human well-being and the synergies and trade-offs among them.

The challenge in ecosystem services analysis and valuation is to assess the relative contribution of the natural capital stock in this interaction and to balance our assets to enhance sustainable human well-being.

The idea of having a national account for wealth accrued over a year is accepted in most major economies. Such national accounts (GDP, net national product, gross savings) provide a measure of an economy’s performance and form the basis for socio-economic policies, while highlighting the gap between potential and actual economic output.

GDP computations indicate the economic activity in a country, with rising GDP growth rate often leading to international prestige. However, such estimates often exclude the variations in natural capital by assuming them to be constant and indestructible.

Environment provides us with the necessities of life and basic material for development. In the pursuit of more development, most nations have ignored the economic aspects of the exploitation of environment.

In a modern economy, the challenge is to estimate of depreciation to natural capital.

Such natural capital is often self-generating (water, clean air) but needs to be handled in a sustainable way in order to avoid depletion.

Natural capital can cover entire ecosystems such as fisheries and forests, besides other hidden and overlooked services.

For example, the regeneration of soil, nitrogen fixation, nutrient recycling, pollination and the overall hydrological cycle.

Valuing such ecosystems can be challenging, with their market value often termed as zero. When pollution happens, it is actually a depletion of our natural capital.

Consider groundwater. Most groundwater basins in India are subjected to unrestricted extraction until the ‘marginal value of extracting water is less than the unit extraction cost’ i.e. when the water table drops so low new borewells are needed. Effectively, any rents due to groundwater depletion are dissipated indefinitely.

Now many economists have pushed for an “environmental Kuznets curve”, highlighting that the ‘relationship between GDP per capita and the concentration of sulphur dioxide in the local air’ is an inverted U curve. Such a relationship leads to the postulation that people from ‘developing countries can’t place a weight on natural environment’ and should consider pollution as an acceptable side-effect of GDP growth.

However, this inverted U curve is found primarily for local pollutants that lead to short-term damages (sulphur, particulates) and not for pollutants that lead to long term and dispersed costs (carbon dioxide). In addition, the inverted U curve hides systemic consequences of emissions. We are long past treating natural capital as a luxury. In fact, it is a necessity.

India routinely suffers from high levels of air pollution that impose costs on local transport, health and liveability in urban and rural areas.

When economic growth leads to the destruction of forests, wetlands and woodlands for agriculture, mining or even urban expansion, it is typically the poorest of the traditional dwellers who suffer. Ecological collapse can soon come, examples being the Darfur region in Sudan and countries in the Horn of Africa. All were subject to rapid socio-economic decline.

Some attempts to consider “Green GDP” in the Past:

Green GDP aims to capture the true position of a country as it includes the condition of the natural resources of the country, which in fact affect the quantum as well as pace of development.

India has sought to unveil “green GDP” figures in the past. In 2009, the Centre announced that it would publish a “green GDP” that would include the environmental costs of degrading and depleting our forests, grasslands and natural stock.

An expert programme, sponsored by the Ministry of Statistics and Programme Implementation, released a Compendium of Environment Statistics 2013.

The group recommended that India shift to a system of measuring comprehensive national wealth, which includes items such as human capital, capital equipment and natural capital. However, implementation of such well-founded recommendations has been constrained by the lack of micro-level data on capital formation, particularly in a natural context.

While the 12th Five Year Plan undertook groundwater resource mapping at the national level, a similar focus is essential for data on land usage, forests and mineral wealth.

India’s current national accounts incorporate such environmental considerations in a limited fashion. GDP includes the value of: minerals extracted; timber, fuelwood and non-timber forest products; natural growth of cultivated assets for some crops; and the output from dung manure.

In addition, ‘gross fixed capital formation contains output estimates from the improvement of land along with irrigation works and flood control projects’.

However, even in GDP estimates of timber value, there is significant under-estimation, non-monetised goods and services provided from timber forests are not considered.

India should seek to publish “green GDP” figures that take into account depreciation of natural capital stock due to economic exploitation and environmental degradation. This can follow the template provided by the UN’s System of Environmental-Economic Accounting.

A few studies have tried to document the ecological services offered by natural capital in India. But we need a ‘greater push for empirical studies of the potential value of such ecosystem services’.

Adapting our national accounts in line with this framework will help in incorporating the value of the environment in our growth while helping us to focus on developing a feasible transition path to a green economy.

Interaction between built, social, human and natural capital required to produce human well-being. Built and human capital (the economy) are embedded in society which is embedded in the rest of nature.

Ecosystem services are the relative contribution of natural capital to human well-being, they do not flow directly. It is therefore essential to adopt a broad, transdisciplinary perspective in order to address ecosystem services.