Insights into Editorial: Signals from a bankruptcy 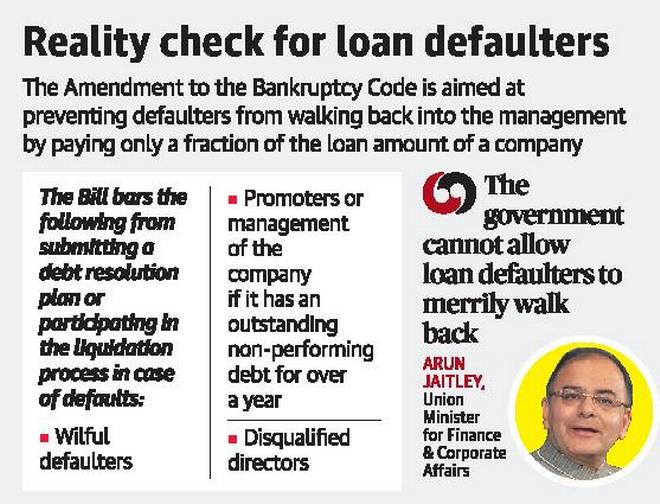 Making the first major resolution of a bankruptcy case under the new Insolvency and Bankruptcy Code (IBC), Tata Steel acquired 73% stake in the bankrupt firm Bhushan Steel for about Rs.35,000 crore.

The banking problem is closely related to high corporate leverage. The two problems are known as the ‘twin balance sheet’ challenge. If it does not effectively address that challenge, India will continue to face weak private investment and modest economic growth.

Between April 2014 and September 2017, the bad loan recovery rate of public sector banks was as low as 11%, with non-performing assets worth 2.41 lakh crore written off from their books.

The Finance Ministry now expects banks to recover more than 1 lakh crore from the resolution of the other cases referred by the RBI to the NCLT.

Further, weak corporate and bank balance sheets in India also contributed to a sharp slowdown in investment, thus, simply lowering policy interest rates was not enough to revive investment in that country.

The new bankruptcy code and the recapitalisation package for public sector banks are expected to support a gradual recovery in private investment.

Bankruptcy is an important piece of India’s reform plan across the three big areas of monetary policy, fiscal policy and structural change.

Bankruptcy is an important ingredient in fixing our Rs 10 lakh crore bad loans, but we shouldn’t rest till we have a self-healing system with zero tolerance in bad loan revealing, recognising and resolving. Everything is detail once we resolve to stop stealing from our grandchildren.

The Bhushan bankruptcy represents another brick in the wall of a new corporate meritocracy where the rule of law matters, more equity is raised, and a market for corporate control is born.

The key issue still remains whether advances paid by customers are treated similar to that of debt owed by the company to banks and other vendors in the normal course of business and the order of priority in which repayment will be made in the insolvency process.

The Supreme Court should step in to clarify this major grey area in the code, which is proving a pain point for customers of assorted kinds and where a quick solution needs to emerge.

The strict time limit for the resolution process as mandated by the IBC is an area that has drawn much attention, and it merits further review in order to balance the twin objectives of speedy resolution and maximising recovery for the lenders.

To its credit, the government has been willing to hear out suggestions. It would do well to implement the recommendations of the Insolvency Law Committee which, among other things, has vouched eligibility criteria.

Enthused by successful conclusion of Bhushan Steel case, the Finance Ministry expects banks to write back more than 1 lakh crore after the resolution of all 12 NPA cases referred to insolvency proceedings by the RBI it its first list.

Bhushan’s bankruptcy — an important and beginning in bending the arc of history towards economic justice — needed political courage and many selfless, honest and competent public servants at the RBI, Department of Financial Services and Economic Affairs, Ministry of Company Affairs, IBBI, and NCLT.

Their rewards lie in the prayers of our grandchildren for a banking system that doesn’t confiscate public money desperately needed in healthcare and education.

The amount coming from resolution under the Insolvency and Bankruptcy Code (IBC) will directly add to the bottomline and help in reduction of NPAs of the Public sector banks.

Going forward, amendments to the bankruptcy code should primarily be driven by the goal of maximising the sale price of stressed assets.

This requires a robust market for stressed assets that is free from all kinds of entry barriers.

With regard to the medium-term outlook, potential economic growth is on a downward trend in several countries owing to population ageing, slower capital accumulation and modest productivity growth, said United Nations.

At the same time, rapid technological advancements, while promising immense opportunities are also posing considerable challenges in terms of job polarisation and income and wealth inequalities.

Maybe even consider differentiated and risk adjusted premiums for deposit insurance. Most importantly, acknowledge that the “tone-from-the-top” on bad loans which created an enforcement “conflict of conviction” is ending but needs persistence. We must now take the long view and shift from fire-fighting to a building safety code.

Maybe move nationalised banks to an independent holding company that can provide a strong voice of capital, effective governance and a new human capital thought world such as postings, promotions, transfers, training and specialisation.

We need sharper accountability for bank boards, board members, auditors, executives, shareholders, regulators, and supervisors. Maybe merge some banks while simultaneously encouraging competition by selling some and licensing more.