Insights into Editorial: A ‘pilgrimage’ to Nepal 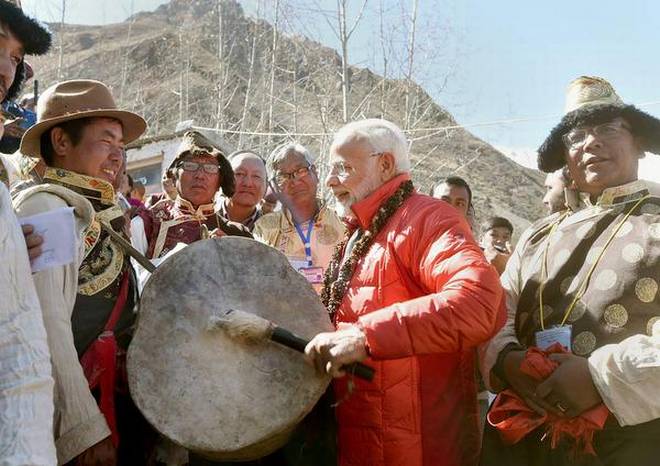 Prime Minister, Narendra Modi visited Nepal. His third time visit since he became Prime Minister in 2014. Each of the visits has been markedly different, in terms of both atmospherics and outcomes. This is due to the political backdrop against which it took place, reflecting the evolving Nepali domestic political transition from a centralised monarchy to a federal republic and the complex nature of India-Nepal relations.

Mr. Modi visit this time was not just good neighbourliness but more a realisation that the relationship had deteriorated in recent years and there was an urgent need to arrest the slide.

The focus of Prime Minister Modi’s latest visit to Nepal was more on connectivity and trade, in comparison to earlier emphasis on ensuring relief and rehabilitation of the people affected by the devastating earthquake of 2015.

Nepal was among Mr. Modi’s first destinations abroad, in keeping with his ‘neighbourhood first’ policy. However, there is an concern with Nepal because, Part of the reason was Nepal’s ongoing political transition — a Maoist insurgency in Nepal which lasted from the mid-1990s till 2005, a delicate peace process which was mid-wifed by India and a new constitution-drafting exercise that began in 2008. This time Mr. Modi’s visit was a successful exercise in correcting this perception.

He addressed the Constituent Assembly, the only foreign leader to have done so, touching all the thorny issues in the relationship and hitting the right notes. He spoke about respecting Nepali sovereignty, reiterated readiness to revise the 1950 Friendship Treaty in line with Nepali wishes, offered encouragement for the constitution-drafting process while wisely refraining from any suggestions, offered generous terms for power purchase and announced a billion-dollar line of credit on generous terms.

A long joint statement was issued, highlighting (HIT – Highways, Information ways and Transmission ways) connectivity projects with clear timelines. Political parties and civil society were unanimous in concluding that a new chapter in India-Nepal relations was being opened.

During his visit when he spoke about the need for the spirit of consensus to guide the constitution-drafting so that it could become an instrument to fulfil the aspirations of all Nepali citizens, it was criticised as gratuitous advice and even described by some as interference in Nepal’s internal affairs.

The problem lies in the fractured politics of Nepal. Traditionally, hill elites (Bahuns and Chettris) who constitute 29% of the population have ruled Nepal. This is as true today as during the monarchy for the leadership of the three main political parties — Nepali Congress (NC), United Marxist-Leninist (UML) and the Maoists — is drawn from the same elites.

The Madhesis constitute 35% but have traditionally been marginalised, live in the Terai areas bordering India and share close ties (roti-beti ka rishta) with their kin across the border.

Relations with India often become an issue in Nepal’s domestic politics as politicians seek to don the mantle of Nepali nationalism which invariably carries within it a grain of anti-Indianism.

The “catalytic role of connectivity” between India and Nepal:

The two sides specially emphasised the “catalytic role of connectivity”. With cross-border connectivity being a crucial factor to “enhance people-to-people linkages and promote economic growth and development”, the two leaders lent a renewed dynamism to several infrastructural schemes and projects.

Mr. Modi realised that the political landscape was shifting. China was now keen to expand its presence in the region with ambitious projects. However, Mr. Oli made India his first foreign destination and Mr. Modi has reciprocated with a quick return visit. Janakpur and Muktinath were included in the itinerary and a confidence.

Muktinath Temple is regarded as sacred place for both Hindus and Buddhists located in Muktinath Valley. The temple at an altitude of 3,710 metres at the foot of the Thorong La pass in mountainous Mustang district.

The visit was high on symbolism, less so on substance. Mr. Modi described it as a visit by the ‘Prime Pilgrim’. With prayers offered in Janaki Mandir, Muktinath and Pashupatinath, the focus was on religious and cultural commonalities.

A bus service between Janakpur and Ayodhya was inaugurated.

Only one of the earlier commitments, the 900 MW Arun III hydel project, has progressed and both Prime Ministers jointly laid its foundation stone. Of the four planned Integrated Check Posts, one is now functional after over a decade.

Cooperation in agriculture, inland water-ways, a survey for a railway line from Raxaul to Kathmandu and increasing air connectivity.

A railway services agreement, additional air links connecting Lucknow, Pokhara and Nepalgunj in six months, setting up of the Pancheshwar Development Authority to complete the detailed project report in a year, concluding an MoU for the Nepal Police Academy, pledge of $1 billion (increased by another $1 billion after the 2015 earthquake) and creating a Buddhist circuit connecting Lumbini with Sarnath and Bodh Gaya.

Most of these have remained announcements. With China stepping up its game in Nepal, this is no longer a tenable situation.

Deepen and strengthen cooperation in areas like trade, economic, investments, water resources, energy cooperation, security, efforts, culture, education and people-to-people ties. A permanent bilateral mechanism is required to save the plains population of Nepal suffering from massive floods that have also affected downstream areas across the border.

A pilgrimage is part expiation and part a new beginning. The first may have been achieved but a new beginning based on the principles of “equality, mutual trust, respect and mutual benefit”, phrases that Nepal now insists on, will require time, avoiding mixed messaging and a sustained effort by India in ensuring implementation of long-pending economic cooperation projects.

India must focus on connectivity as a leverage to increase its strategic influence in the neighbourhood.  India must make swift and effective implementation of infrastructure and development projects in Nepal.