(a) Pressure gradient is weak

The conditions required for tropical cyclones are sea surface temperature more than 26’c, sufficient coriolis force, pressure gradient force and pre-existing vortex. Tropical cyclones do not form near the Equator (within 5 degrees latitude) b/c the Coriolis force is 0 and air tends to flow straight into low pressure centers, so it feels up before the pressure can drop enough.

a) Temperature falls below 0°C

Relative Humidity expressed as a percentage (%) is the amount of water vapor in a column of air compared to the total amount of moisture that the same column of air can hold. When water vapor becomes saturated, it reaches its capacity for holding water so further cooling results in condensation and possibly rainfall.

(a) Air movement is generally towards the equator

Beyond Tropic of Cancer and Capricorn the sun rays are oblique. As the angle of sun rays decreases poleward, the amount of insolation received also decreases.

The cold Benguela current flowing northward along western coast of Africa, has desiccating affect which leads to formation of arid conditions

The ocean currents of Indian Ocean are completely influenced by the changing nature of the monsoon wind system. 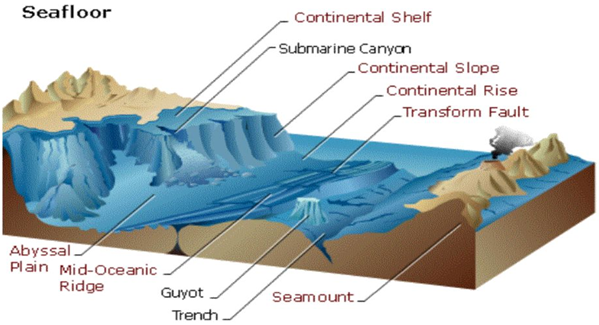 (a) Erosion by glaciers

(b) Erosion by rivers

(c) Movements of the earth’s crust due to plate tectonics

(d) Erosion and deposition of sediment by waves

A fjord is a long, deep, narrow body of water that reaches far inland. Fjords are often set in a U-shaped valley with steep walls of rock on either side. Fjords are found mainly in Norway, Chile, New Zealand, Canada, Greenland, and the U.S. state of Alaska.
Fjords were created by glaciers. Glaciation carves deep valleys. This is why fjords can be thousands of meters deep. Fjords are usually deepest farther inland, where the glacial force was strongest.

(c) Phytoplankton production is high because of El Niño

(d) None of the above

Winds blowing across the ocean surface push water away. Water then rises up from beneath the surface to replace the water that was pushed away. This process is known as “upwelling.”

Upwelling occurs in the open ocean and along coastlines. The reverse process, called “downwelling,” also occurs when wind causes surface water to build up along a coastline and the surface water eventually sinks toward the bottom.

Water that rises to the surface as a result of upwelling is typically colder and is rich in nutrients. These nutrients “fertilize” surface waters, meaning that these surface waters often have high biological productivity.  Therefore, good fishing grounds typically are found where upwelling is common. The anchovy population that is the basis of the Peru fishery, the world’s largest, is a phytoplankton feeding species, supported by an upwelling based ecosystem.

Because of the level topography and higher density of populations, the rail density is higher in states of Northern plains. Topography of peninsular plateau and north eastern states leads to higher cost of laying rail lines. Rail density is lower. Gorakhpur is the HQ of North-eastern railways. Maligaon( Guwahati ) is HQ of North east Frontier railways.

Which of the following statements is/are correct

(a) Rural to rural

(b) Rural to urban

Highest percentage of internal migration is between rural to rural. Most of migration are related to marriage and agricultural labours. Female migrants dominate in intrastate migration.

(a) Hardwar and Kanpur

(b) Allahabad and Varanasi

National Waterway 1 or NW1 will starts from Allahabad to Haldia with an distance of 1620 km. The NW 1 run through the Ganges, Bhagirathi and Hooghly river system with having fixed terminals at Haldia,Farrakka and Patna and floating terminals  at most of the riverside cities like Kolkata,Bhagalpur,Varanasi and Allahabad.

15.Consider the following cities on eastern coast of Australia

The correct sequence of these cities, from North to South is

(a) of the rugged terrain

(b) the sub-Saharan soil is most suitable for forest growth

(c) of equatorial type of climate

(d) None of the above

Equator passes through Central part of Africa. Having equatorial type of climate the region is densely forested.