The Mississippi has a bird’s-foot delta, with several main branches like the foot of a bird extending into the Gulf of Mexico. The Nile and Ganga have fan-shaped arcuate deltas with numerous distributaries. Delta of Amazon is partly submerged in coastal waters to form estuarine deltas.

3 . The process that results in the breakdown of rocks and minerals in situ is known as

Weathering refers to the breakdown or disintegration and decomposition of rocks in situ ( at origins ) through mechanical and chemical changes in the rocks.

Erosion is the active wearing away of the earth’s surface by moving agents like running water.

Attrition is a form of coastal or river erosion, when the bed load is eroded by itself and the bed. The erosion of carbonate rocks such as limestone through weak carbonic acids in solution form is corrosion.

4 . Which of the following volcano is called as ‘Lighthouse of the Mediterranean’

Stromboli is a small island in the Tyrrhenian sea , is known for constant eruption and is considered as a active volcano. Ancient Romans called it as ‘Lighthouse of the Mediterranean’ for its regular eruption.

Mt Karkatau is in Indonesia , Sunda straits midway between Java and Sumatra.

Mt Pelee is in Carribean sea.Mt Vesuvius in located on Gulf of Naples in Italy.

5 . Which of the following pairs of plates are not in convergent motion with respect to each other? 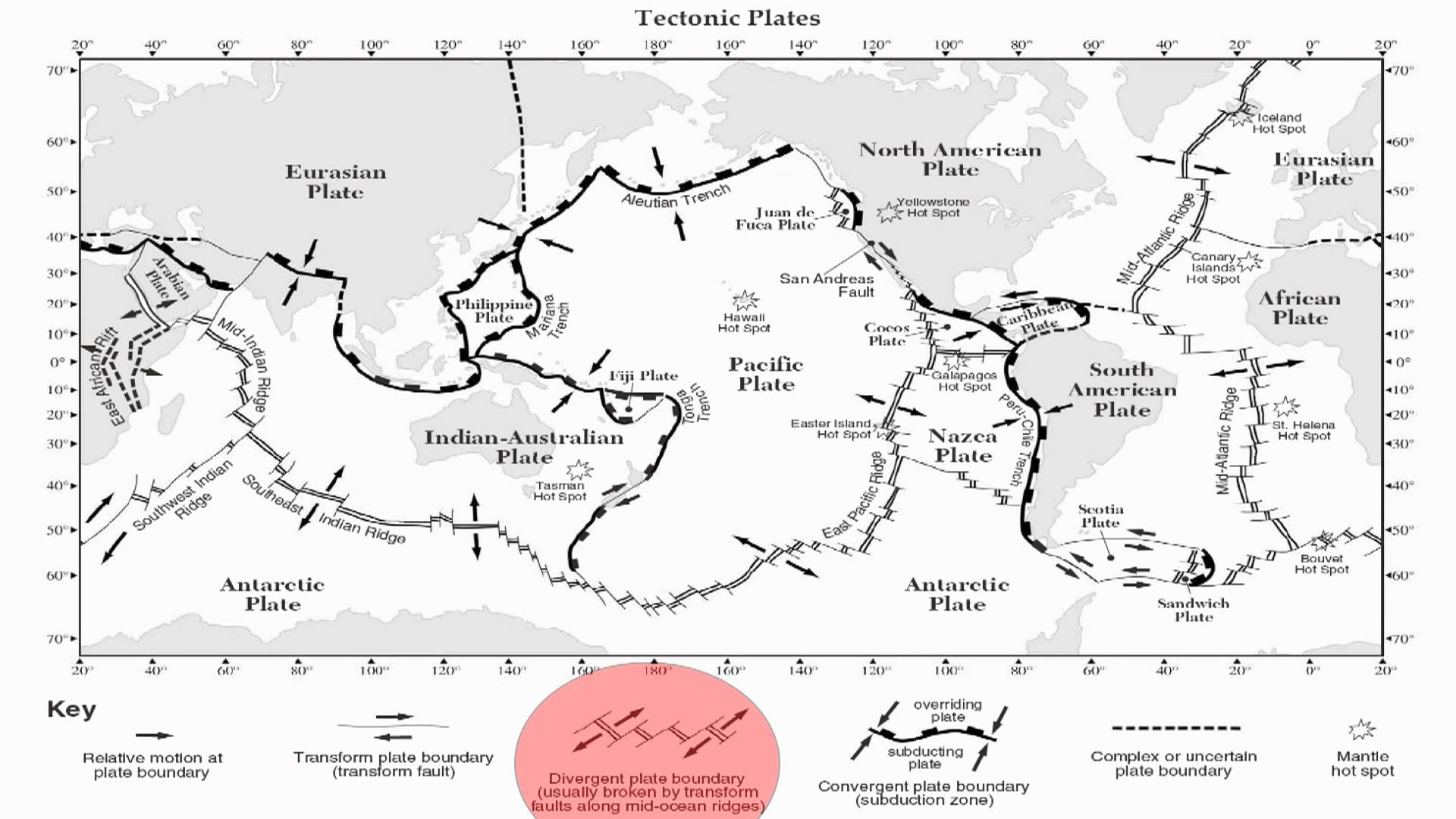 (b) meltwater from glaciers

(c) rivers along the mouth

These are large areas of glacial sediment deposited by melt water streams furthest away from the glacial snout. They are formed from gravels, sands and clays, the clays being furthest away from the snout because the smaller particles are carried furthest. Material that was already deposited by older streams and ice activity may be reworked and sorted by the streams forming the outwash plain, and carried beyond the original maximum extent of the ice sheet / glacier.

Sedimentary rocks are the most common rock types which are freely exposed on the earth’s surface. They are formed from other rock materials since they are made up from the buildup of weathered and eroded pre-existing rocks. Sedimentary rocks are produced from previous rocks that are relentlessly weathered or eroded and then deposited where they undergo compaction and cementation through a process known as lithification- changing of sediments into a rock.

Maize is rainfed crop which is predominantly grown during Kharif season. It is an important cereal grown in India after rice and wheat. Karnataka, Andhra Pradesh , Maharashtra, Rajasthan , Tamil Nadu, Bihar, Uttar Pradesh etc are the leading producers.

9.Which of the following ports is/are located on the Coromandel Coast in India

Select the correct answer using the codes given below:

Which of the following is/are correctly matched

Naomundi is in Jharkand famous for haematite iron-ore

Jaduguda has one of largest deposits of uranium in Jharkand

The Black Cotton soil of India

Black soil is also called regur soil is extensively found over Deccan plateau and Malwa plateau. It is known for cultivation for cotton, sugarcane, cereals, pulses and oilseeds. It has the highest moisture holding capacity. It has found in around 16.65 % of total area in India.

The Tropical Dry Evergreen Forest (TDEF) is the indigenous forest of the coastal seaboard of South East India. Historically the forest extended from Vishakapatanam to Ramanathapuram as a belt of vegetation between 30 and 50 km wide, bordered on one side by the sea and on the other side by a forest that becomes increasingly deciduous as one moves inland. Rainfall averages 800 mm/year, and mostly falls during the highly variable northeast monsoon between October and December. Unlike most of the world’s tropical and subtropical dry broadleaf forests, whose trees tend to lose their leaves during the dry season to conserve moisture, the East Deccan dry evergreen forests retain their leaves year round. Only two other ecoregions exhibit a similar pattern, the Sri Lanka dry-zone dry evergreen forests and the Southeastern Indochina dry evergreen forests.

13.National Highway 44(Srinagar-Kanyakumari), one of the longest national highway in India passes through which of the following cities

(a) hard and senile topography

(b) the groundwater table is high

(c) the sources of canals are perennial rivers

(d) the region is densely populated

Canals can be effective source of irrigation in areas of low level relief, deep fertile soils, perennial source of water and extensive command area. Therefore, the main concentration of canal irrigation is in the northern plain of India, especially the areas comprising Uttar Pradesh,Haryana and Punjab.

(b) Andaman and Nicobar

In the Gulf of Kutch, Pirotan Island is one of the 42 islands which compose the Marine National Park. India’s first national marine park comes under the Jamnagar district of Gujarat. The park gives an opportunity to witness the coral reefs, mangroves, incredible aquatic creatures and beautiful variety of birds in the unruffled setting of nature.

Pirotan lies 12 nautical miles off the coast (Bedi Port) and stretches up to 3 sq km. There are two islands, Pirotan Island is the most popular one. Narara is the other island out of the two.

Original volume of water = 5/6 of the tank

After taking out 5 litres and adding 2 litres, i.e. adding 3 litres effectively, the volume of water = 4/5 of the tank

Full capacity of the tank = 90 litres.

But the pair of 2 and 6 can’t be considered because they have a common factor of 2. Otherwise the HCF would have been 5×2 = 10.

The number of zeros is nothing but numbers of factor 5 in the above RHS.

The victorious candidate has won by 32% of valid votes or by 1024 votes.

Let the cost of each adult ticket be Rs.’x’