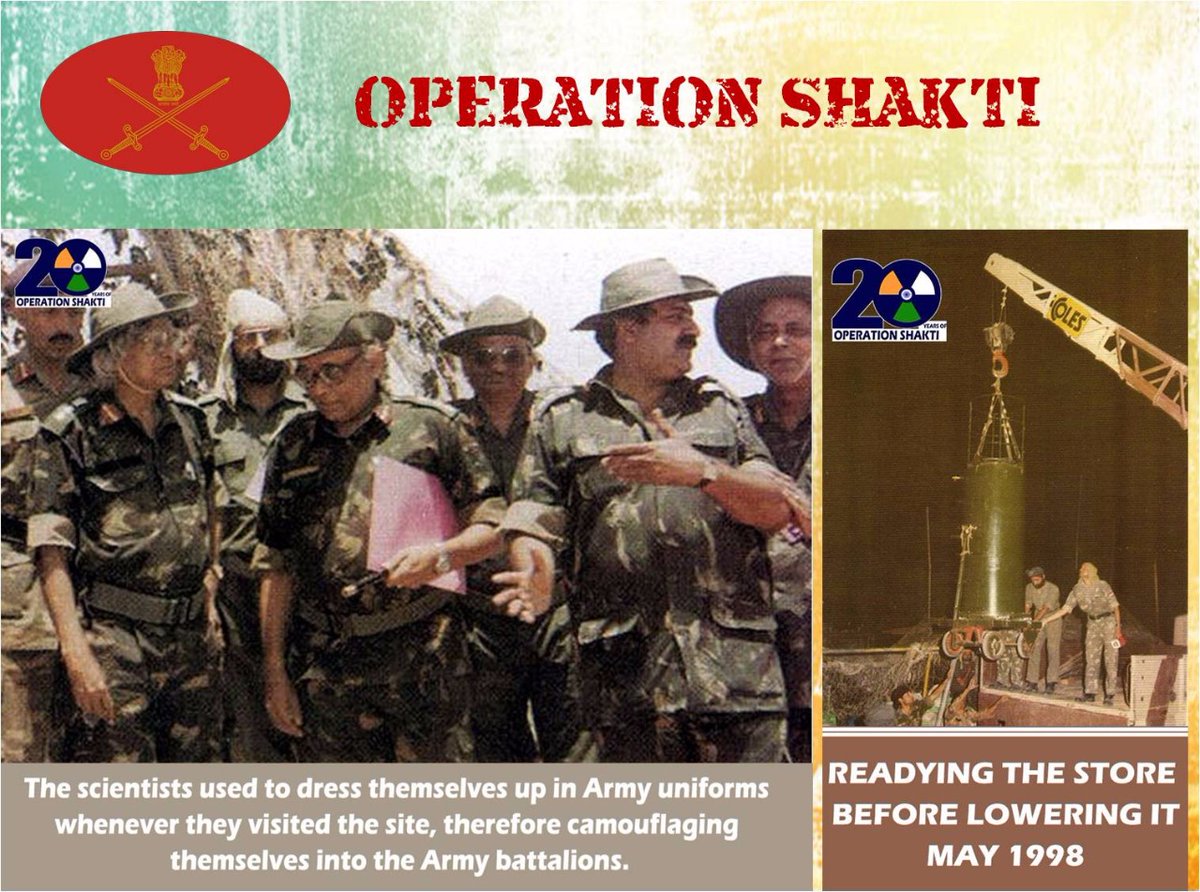 After Independence, India got fame from its two nuclear tests, 1st after two decades of independence and another in 1998, which made India to adjust its place in the list of self-reliant and nuclear capable nations. The tests was carried out in secrecy and was revealed after its success. Pokhran which means “Place of 5 Mirages” is the place where both the nuclear tests were carried out. These tests raised a worldwide uproar and registered India’s name in the list of nuclear nations.

Twenty years ago, on May 11, 1998, India took a leap into the unknown world of nuclear weapon powers with the tests at Pokhran. The five nuclear devices detonated during the Pokhran II Test were Shakti I, II, III, IV and V.

It consisted of 5 detonations. First one was fusion and remaining 4 were fission bomb test. This test made India 6th nation to have tested a nuclear weapon.

A series of five nuclear explosions were conducted between May 11 and May 13, 1998.The second Pokhran Nuclear Test was conducted after Smiling Buddha in 1974.

May 11, the day of first of the five explosions during the Pokhran-II nuclear weapons testing, was officially declared as the National Technology Day.

The decision was taken after great deliberation and with preparation, but the reaction of the world would affect the future of India was unknown. But today, it is certain that the action was timely and inevitable. India has more or less achieved the strategic goals that the nuclear tests set their sights on.

The United States imposed sanctions on India, cutting off all aid except humanitarian assistance. The then President Bill Clinton signed official papers imposing the measures on India for carrying out nuclear tests.

However, with those difficulties, Pokhran II has brought India to the nuclear mainstream and opened up the global nuclear market for development of nuclear power without signing the Treaty on the Non-Proliferation of Nuclear Weapons (NPT) or the Comprehensive Nuclear-Test Ban Treaty (CTBT) which further lead to The U.S.-India Nuclear Deal. The India-US civil nuclear deal was signed in 2008, after nearly 30 years of US-imposed sanctions since India tested its first nuclear weapon (1974).

The core of this agreement was the emphasis on non-proliferation of Weapons of Mass Destruction (WMD). Even though India did not officially join the Non-Proliferation Treaty (NPT)

The Nuclear weapons doctrine has become the cornerstone of India’s diplomatic, military and political policy in the international arena.

Pokhran-II nuclear tests carried out 20 years ago saying it established India’s nuclear prowess in the world. India’s test was not only successful but in a way, India had demonstrated its might in the field of science and technology. We can also say the date has been engraved in the history of India as a desmonstration of its military power.

Pokhran II test was concluded in 1998 and is always remembered as a day of pride for India. Many known personalities, political anomalies and Indian Military hunks coordinated with each other to carry out this test and made it successful. The test showed the self-dependency of India and still 11 May occupies a special place in calendars of scientists and researchers.

Despite not being a signatory to either the CTBT or NPT, India has managed to secure civilian nuclear deals with the US, Japan and Australia, among countries, thanks to an NSG waiver exempting India from the full-scope International Atomic Energy Agency (IAEA) safeguards. This waiver was backed by France, Russia, US, and Germany.

Although NSG membership remains a distant dream thanks to China’s veto powers, Indian diplomacy and commitment to non-proliferation (unlike neighbours Pakistan) has triggered entry into other multilateral export regimes like the 35-nation strong Missile Technology Control Regime (MTCR), which seeks to prevent the proliferation of missile and unmanned aerial vehicle technology.

For India, joining groups like the NSG and MTCR is “driven by the need for access to high technology equipment, materials and know-how without which Indian industry cannot upgrade itself rapidly and remain globally competitive,” it would help “strengthen its reputation as a responsible power committed to goals of non-proliferation of weapons of mass destruction”.

India is now a member of three out of four multilateral export control regimes — MTCR, Wassenaar Arrangement, Australia Group — and is in the reckoning for membership of the NSG. Pokhran-II gave India the strategic space to manoeuvre at the world stage, and to showcase its international behaviour on the rules-based system, even without being part of the Nuclear Non-Proliferation Treaty.

Regardless of the international reactions to the nuclear tests of May 1998, the general public of India was happy and lauded the government’s undeterred stand regarding national security.

Another major event that has shaken confidence in the value of nuclear power in India’s energy mix was the Fukushima disaster. It has changed the global nuclear power scenario beyond recognition, though India has maintained that it is “business as usual”.

India’s intention to use of nuclear power for civilian purpose: The share of nuclear power in the total electricity generated in the country in the year 2016-17 was a mere 3.05%. According to the data from Department of Atomic Energy, the present installed nuclear capacity is 6780 MW and it will reach 13480 MW by the year 2024 with the completion of projects under construction.

The government’s recent decision to build more indigenous reactors points to the fact that the dream of imported nuclear reactors dotting India has disappeared. India’s focus has rightly shifted to solar and other new sources of energy.

India’s No First Use policy pertaining to nuclear weapons was cemented by the Cabinet Committee on Security meeting in January 2003. The Indian government’s nuclear doctrine talked about “building and maintaining a credible minimum deterrence,” and “No First Use”, which meant nuclear weapons will only be used in retaliation. In the event of an attack, the retaliation would be “massive and designed to inflict unacceptable damage.”

On the 20th anniversary of the Pokhran-II tests, it is safe to say India has burnished its reputation as a responsible nation dedicated to the spirit of non-proliferation of nuclear weapons, despite certain comments by some ministers – which can be considered nonsensical.

Twenty years after Pokhran-II, this demonstrated behaviour has given India the moral, political and legal standing to convey to the world that it plays by the rules.

So, be it the Paris Climate Accord, or the NSG, or freedom of navigation in the Indo-Pacific, or counter-terrorism initiatives, or a claim to be a permanent member of the UNSC, Pokhran-II and what followed has given India the right to claim the tag of a responsible power — a valuable asset in times when powers like the US and China are perceived to be not adhering to international commitments.