Context: Aimed at empowering vulnerable and marginalised women by imparting skills training, the United Nations Development Programme (UNDP) will soon set up a skill development centre at ‘Bharosa,’ an integrated support centre for distressed women and children in Hyderabad.

Context: A meeting of stakeholders on Samarth – Scheme for Capacity Building in Textile Sector under the Skill India Mission was recently held in New Delhi to familiarize the stakeholders about the scheme and its guidelines. The meeting was chaired by Union Minister of Textiles, Smt Smriti Zubin Irani.

In January 2016, India signed a deal with the United Arab Emirates that allows the Gulf OPEC country to fill half of the underground crude oil storage facility of ISPRL at Mangalore. Therefore, the UAE’s Abu Dhabi National Oil Company will store about 6 million barrels of oil at Mangalore. 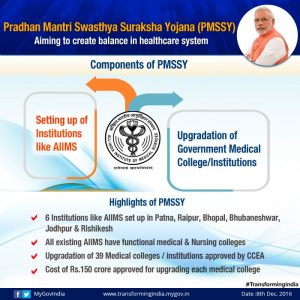 This will lead to increased access to quality health and medication. In addition, the unmet needs of the population which remained hidden due to lack of financial resources will be catered to. This will lead to timely treatments, improvements in health outcomes, patient satisfaction, improvement in productivity and efficiency, job creation thus leading to improvement in quality of life.

The scheme, if implemented properly could be a game changer by enhancing access to health care including early detection and treatment services by a large section of society who otherwise could not afford them. The identification of beneficiaries can be done by linking with Aadhar and similarly following up for services received and health outcomes achieved, thereby helping to monitor and evaluate the impact of the programme.

Ultimately, the scheme could help country move towards universal health coverage and equitable access to healthcare which is one of the UN Sustainable Development Goals or SDGs.

Context: Frozen Semen Station is being set up in Maranga, Purnea in Bihar under the RashtriyaGokul Mission with 100% contribution from the Central Government.

The Mission is being implemented with the objectives to: a) development and conservation of indigenous breeds b) undertake breed improvement programme for indigenous cattle breeds so as to improve the genetic makeup and increase the stock; c) enhance milk production and productivity; d) upgrade nondescript cattle using elite indigenous breeds like Gir, Sahiwal, Rathi, Deoni, Tharparkar, Red Sindhi and e) distribute disease free high genetic merit bulls for natural service.

Rashtriya Gokul Mission will be implemented through the “State Implementing Agency (SIA viz Livestock Development Boards). State Gauseva Ayogs will be given the mandate to sponsor proposals to the SIA’s (LDB’s) and monitor implementation of the sponsored proposal. All Agencies having a role in indigenous cattle development will be the “Participating Agencies” like CFSPTI, CCBFs, ICAR, Universities, Colleges, NGO’s, Cooperative Societies and Gaushalas with best germplasm.

Funds under the scheme will be allocated for the establishment of Integrated Indigenous Cattle Centres viz “Gokul Gram”.

The objective of the policy is to provide a framework for promotion of large grid connected wind-solar PV hybrid system for efficient utilization of transmission infrastructure and land. It also aims at reducing the variability in renewable power generation and achieving better grid stability.

With significant capacity additions in renewables in recent years and with Hybrid Policy aiming at better utilisation of resources, it is envisaged that the Hybrid Policy will open-up a new area for availability of renewable power at competitive prices along with reduced variability. 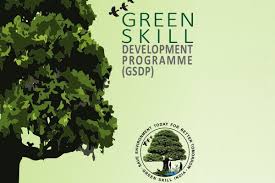 Context: In its bid to create over five lakh job opportunities by 2021 through green skills, the government has launched GSPD-ENVIS mobile app to begin enrolments in 30 expert course under its Green Skill Development Programme (GSPD).

What are Green Skills?

Green skills are those skills required to adapt processes, services and products to climate change and the environmental rules and necessities related to it. They embrace the information, abilities, values and attitudes required to live in, develop and support a sustainable and resource-efficient society. India is the second most populous country in the world is bestowed with a large working population.