1. Which is the most appropriate description of interest rate corridor?

c) it is the weighted average where call money moves

d) it is the difference between repo and reverse repo rates 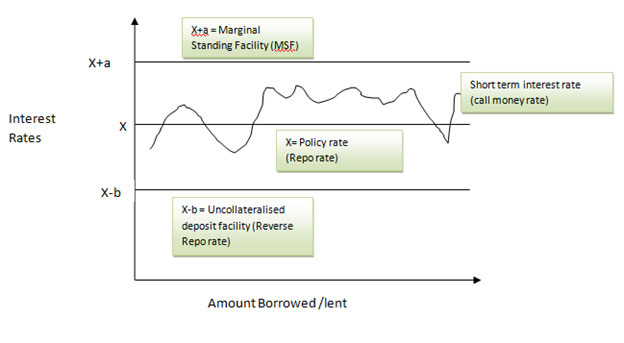 In the Above diagram, it can be established that the interest rate corridor is the range between Marginal Standing facility and the reverse repo rate. In India, policy rate is the fixed repo rate announced by the central bank – Reserve Bank of India (RBI) – for its overnight borrowing/lending operations through its mechanism for managing short term liquidity – the Liquidity Adjustment Facility. The Repo Rate is an instrument for borrowing funds by selling securities of the Central Government or a State Government or of such securities of a local authority as may be specified in this behalf by the Central Government or foreign securities, with an agreement to repurchase the said securities on a mutually agreed future date at an agreed price which includes interest for the funds borrowed.

Call Money: Rate at which banks borrow from each other. (MIBOR-Mumbai Inter Bank Operating Rate)

Hence monetary policy is not solely based on inflation targeting. So statement 1 is incorrect.

Under the amended RBI Act, the monetary policy making is as under:

4. Consider the following about banking ombudsman:

5. Which of the following is a feature of decentralized PDS:

Which of the above statements is/are correct ?

The Scheme of Decentralised Procurement (DCP) of foodgrains (rice and wheat) was introduced in 1997-98 with a view to enhance the efficiency of procurement and Public Distribution System (PDS) and to encourage local procurement and reduce out go of food subsidy. Under the scheme, the States undertake the responsibility of procurement of foodgrains, its scientific storage and distribution through Targeted Public Distribution System (TPDS). The surplus of foodgrains procured by DCP States, in excess of their TPDS requirement is handed over to FCI for the Central Pool stocks and deficit, if any, is met by FCI.

Hence statement 1 is correct but statement 2 is incorrect.

6. Which of the following is/are true with respect to The National Policy for Farmers 2007

7. Which of the following is NOT correct with respect to determinants of MSP in India:

a) Pricing policy is rooted in the “cost plus” approach

b) Terms of trade between agriculture and non-agricultural sector

Cost of production (CoP) is one of the important factors in the determination of MSP of mandated crops. Besides cost, the Commission considers other important factors such as demand and supply, price trend in the domestic and international markets, inter-crop price parity, terms of trade between agricultural and non-agricultural sectors and the likely impact of MSPs on consumers, in addition to ensuring rational utilization of natural resources like land and water.

Thus, pricing policy is rooted not in ‘cost plus’ approach, though cost is an important determinant of MSP.

Providing India’s young and burgeoning labor force with good, high productivity jobs will remain a pressing medium term challenge. An effective response will encompass multiple levers and strategies, above all creating a climate for rapid economic growth on the strength of the only two truly sustainable engines—private investment and exports. Hence statement 1 is correct

So many people chasing so few low-level government jobs points out that there is a dearth of jobs in the private sector and people fall back on government jobs due to uncertainty in the jobs market. Despite the government’s thrust on generating jobs through entrepreneurs by giving easy small loans, 200 people chasing one job shows that the jobs crisis in India is deep. Not only is the private sector not adding enough new jobs, the government is cutting its jobs. Steep salary hikes due to the Pay Commission awards and the need for performance-based specialist jobs are forcing state governments to hire workers on contract or just outsource jobs. Several state governments have opted for such steps. Recently, the Tamil Nadu government constituted a committee to identify non-essential posts that can be done away with, outsourced or filled through contract appointments for a fixed period.

Containing public investment will affect the economy in short run as it deprives the economy of money supply. But it will help in long run as it reduces the burden of interest payment and builds up fiscal discipline. Hence statement 2 is incorrect

9. Firm can be said to be within formal sector of economy when

Conceptually, formal (or informal) enterprises are distinguished by registered (or unregistered), organized (or unorganized), and regulated (or unregulated) enterprises. Employment size is a major criterion to define these enterprises.

The economic survey comes up with social security and tax payments as a information source to gauge formality of firms in India. Also, if the firm is receiving any subsidy in any part from the government it has to be registered thus, comes under the definition of formal sector.

10. Consider the following statements about gender sensitivity in India:

Assertion (A): In the absence of old age social security schemes, the son is considered to be the insurance against old age.

Select your answer using the codes below where Assertion is (A) and Reason is (R):

c) A is true and R is false

d) Both A and R are false

The Assertion of son being an insurance is often cited as a factor for lack of gender neutrality in the house in terms of entitlements for food, education etc.

India’s Female Labour Force Participation (FLFP) rate has remained visibly low and the International Labour Organisation ranks India’s FLFP rate at 121 out of 131 countries in 2013, one of the lowest in the world. India had the lowest FLFP rate in South Asia, with the exception of Pakistan. Globally, only parts of the Arab world held a lower FLFP rates than India.

However, the female often is not able to support the household after marriage because of family system in India rather than the lack of opportunities per se.

11. What is circle rates that’s is used in real estate?

a) Circle rate is the market rate of the property being sold.

b) Circle rate is the maximum price at which property is registered.

c) Circle rate is the rate at which the property is bought and is equal to transaction value of property.

Circle rates can be defined as the minimum price at which any real estate asset has to be registered when being transferred.

These rates are set by the state government and undergo revision from time to time. These rates act as an indicator of property prices in a particular area.

A buyer needs to register the property on the actual transaction value or the prescribed circle rate, whichever is higher. Usually, market rate is higher than the circle rates.

12. Consider the following statements are correct with respect to reasons for high dropout rates among boys in India:

Assertion (A): India is one of the country to be blessed with some of the largest river system in the world but significant portion is rendered unavailable

Reason(R) : The natural circumstances like geography, terrain makes it difficult to use all the available water.

c) A is correct and R is incorrect

d) A and R are incorrect

The average annual water availability of the country is assessed as 1869 billion cubic metres (BCM). Of this, total utilizable water resource is assessed as 1123 BCM, surface water 690 BCM and ground water as 433 BCM. While India is blessed with some of the largest river systems in the world, a significant part of this water is rendered unavailable for use due to natural circumstances. For example, Brahmaputra has the highest total water potential of all rivers in India, but only about 4% of this can be successfully used because the mountainous terrain through which it flows makes further extraction impossible. The use of surface water is also affected by dams. With over 5,000 dams, India is behind only China and US on this count. While facilitating irrigation and electricity generation, the dams are adversely affecting water quality in the country.

14. Which of the following is/are included in National Small Savings:

Small Saving schemes have been always an important source of household savings in India. Small savings instruments can be classified under three heads. These are:

Select the correct statements based on the codes below:

As a flagship program of the Government of India in collaboration with World Bank.The Mission will provide a holistic and integrated approach to strengthen and support the entire product development value chain for accelerating the research leads to product development. This will help not only in immediate product development addressing public health needs, but will also help to create an ecosystem which will facilitate development of a continuous pipeline of products.

16. Consider the following about NIVARAN-Grievance Portal:

Select the correct statements based on the codes below:

o It is developed by rail PSU RailTel.

o ‘NIVARAN-Grievance Portal’ is the first IT application to be launched on the RailCloud.

o It is the platform for resolution of service related grievances of serving and former railway employees. (Hence statement 1 is incorrect)

18. Which of the following describes Agri-Udaan appropriately:

a) Steps taken to effectively double farmers income by 2022

b) To support diversification of agriculture

c) To support innovation and entrepreneurship in agriculture

d) To develop agricultural exports to their optimum potential

19.consider the following statements about Millets:

20. Which of the following provides for recognition of trade unions at the central level?

c) Code of Discipline in Industry

There is no provision in the Indian Trade Unions Act or Industrial Disputes Act, 1947, the only two central enactments in this respect in the country regarding recognition of the trade union by employers.

With the evolution of the voluntary measures in the nature of the Code of Discipline in the industry, an attempt has been made to make a provision for recognition of the unions by the employers.

Who is to the right of U? 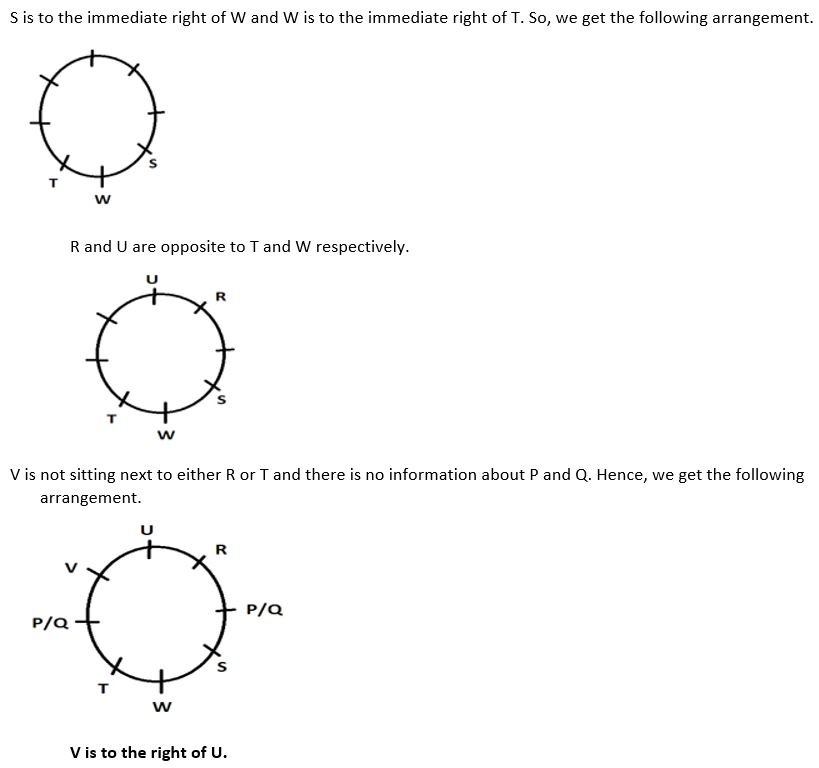 Which pair of people are sitting at the shorter sides of table? 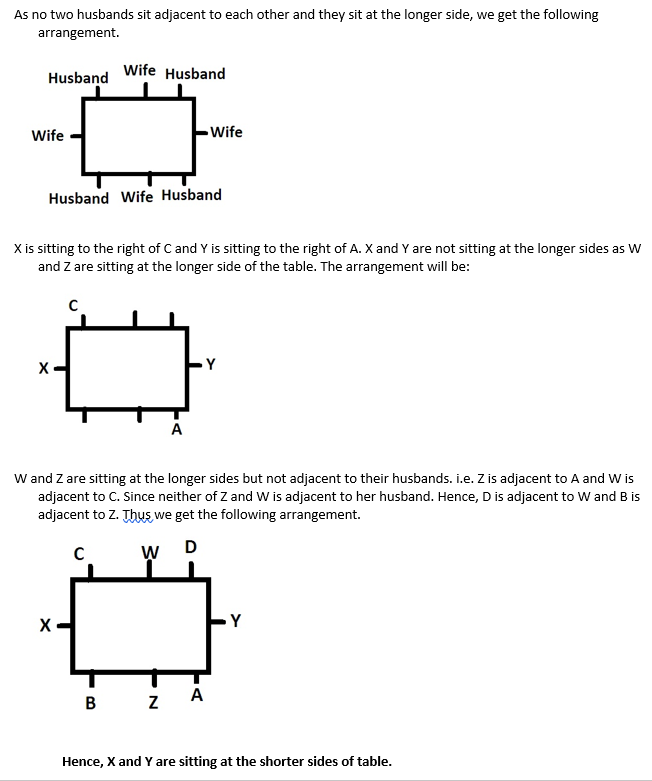 23. A family of eight persons has three married couples. A is the grandmother of C and is the mother-in-law of F. H is the daughter of B, who is the brother of G. D is the only child of G and is the mother of C. E is the wife of B. How is G related to H? 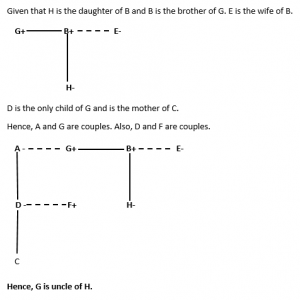 24. A watch, which loses time uniformly, was observed to be 5 minutes fast at 8.00 p.m. on Thursday. It was noticed to be 7 minutes slow at 8.00 a.m. on the subsequent Monday. When did the watch show the correct time?

But to show the correct time, the clock has to gain 5 minutes.

We have to find the sum of odd days from March which is a multiple of 7.