Insights into Editorial: The lowdown on the audit regulator 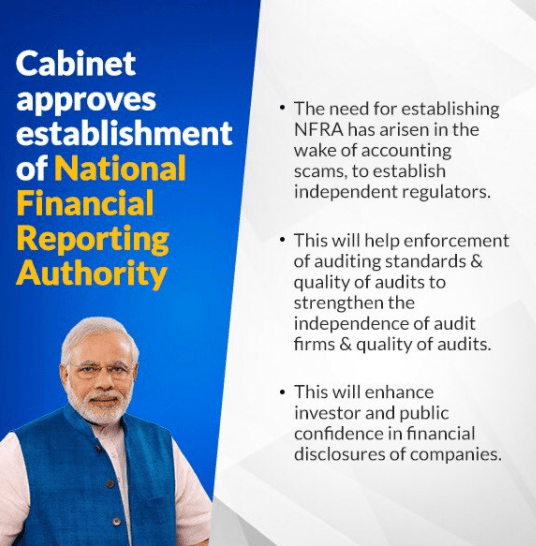 Union Cabinet has approved establishment of National Financial Reporting Authority (NFRA). It is a big step forward in regulating the financial audit of large companies.

The decision comes against the backdrop of various auditing lapses in the banking sector, including the Rs. 12,700 crore fraud at Punjab National Bank.

The NFRA is to be an independent regulator overseeing the auditing profession. Its creation was first recommended by the Standing Committee on Finance in its 21st report.

The NFRA will act as an independent regulator for the auditing profession which was one of the key changes brought in by the Companies Act 2013.

NFRA would be an oversight body for auditors and its jurisdiction would extend to all listed companies as well as large unlisted public companies.

The regulator will have a chairman, three full-time members, and one secretary — though no decision has yet been taken on who will fill these posts.

What does Companies Act, 2013 say about NFRA?

It has also been given the power to investigate matters of professional misconduct by chartered accountants or CA firms, impose penalty and debar the CA or firm for up to 10 years.

No other body shall initiate any proceedings in such matters of misconduct where the National Financial Reporting Authority has initiated an investigation.

NFRA shall have the power to investigate, either suo motu or on a reference made to it.

It will have the same powers as are vested in a civil court under the Code of Civil Procedure, 1908, while trying a suit.

How did the need of setting up of NFRA come now?

While many provisions of the Companies Act, 2013 came into force on April 1, 2014, the setting up of the NFRA, a key recommendation, was delayed.

The decision appears to have been prompted by the latest bank scam of ₹12,636 crore Punjab National Bank fraud that went undetected by auditors.

The Institute of Chartered Accountants of India (ICAI) had initially voiced its discontent with the idea of a regulator for the sector, saying the existing structure was adequate.

The government has clarified that the roles of the new regulator and those of the ICAI will not overlap.

What are the roles of NFRA, ICAI and QRB in auditing?

Institute of Chartered Accountants of India (ICAI) will continue to have monopoly on training and qualifying chartered accountants, giving them licence to practice and regulating them including scrutinising audit quality.

Smaller unlisted companies would continue to be audited by the ICAI.

NFRA is not meant to replace the disciplinary jurisdiction of the ICAI.

The ICAI would continue to play its advisory role with respect to accounting and auditing standards and policies by making its recommendations to the NFRA.

The Quality Review Board (QRB) would continue quality audits for private limited companies, and public unlisted companies below the prescribed threshold.

The NFRA would also have the power to refer cases to the QRB as and when it decided to do so.

Why does it matter?

Most of the major economies of the world have independent audit regulators.

India, as an emerging economy should also have an independent audit regulator. The need for such a body is further reinforced after several financial accounting scams, the most recent of which was the Punjab National Bank scam.

However, the idea for an NFRA came following the Satyam scam in 2009, following which the Standing Committee on Finance recommended the creation of an audit regulator.

Apart from its audit regulator role, the NFRA will have the power to debar erring auditors or audit firm for up to 10 years and impose significant fines on them.

According to the Companies Act, 2013, the NFRA will have powers to impose a fine of not less than ₹1 lakh, but the amount can extend up to five times of the fees received in case of individuals.

The need of the hour is that the government has to set the rules that will stipulate the jurisdiction of the NFRA.

Government should also set a limit on the size of an unlisted company that comes under the purview of the NFRA.