Insights into Editorial: The French connections 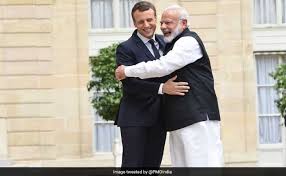 French President’s visit to India aims at strengthening the bilateral economic, political and strategic dimension of engagement between the two countries.

During the talks both the leaders reviewed the progress achieved in bilateral relations and exchanged views on regional and international issues of mutual interest.

Besides, the visit is also aimed at forging not only strong manufacturing and technology partnerships, but also greater people to people contacts.

Why is France important to India?

France and India have a very long history of bilateral cooperation in defence, security, space and high technology.

France is the 9th largest foreign investor in India with a cumulative investment of over 6 billion dollars from April 2000 to October 2017.

Indian Ocean region will be very important in future peace and development and both the countries will release the Indian Ocean cooperation Joint Strategic Vision.

Today, with Brexit and the weakening of the leadership of German Chancellor, French President has positioned himself as the most credible interlocutor in Europe.

In the international context, India and France can benefit from a shared understanding of the challenges that the world is facing today like the global uncertainties produced by Trump’s disruptive foreign policy and Chinese aggressive policies.

India and France are working together to implement the Paris Agreement on Climate Change which US President has renounced.

France has always been sympathetic to similar Indian claims based on its ancient civilisation.

Defence cooperation with France began in the 1950s when India acquired the Ouragan aircraft and continued with the Mystères, Jaguar (Anglo-French), Mirage 2000.

France has historically shown more understanding of our strategic programmes than others. It was the first western country with which we established a Strategic Partnership.

France is the first country with which we initiated a Strategic Dialogue after our 1998 nuclear tests when France refused to impose bilateral any sanctions on us and displayed a far greater understanding of India’s security compulsions compared to other countries.

After the Cold War, France decided that its preferred partner in the Indian Ocean Region would be India.

It was the first P-5 country to support India’s claim for a permanent seat in an expanded and reformed UN Security Council.

What are the outcomes of recent France President’s visit?