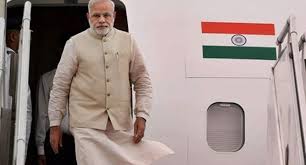 Prime Minister’s schedule of foreign visits has been extremely impressive, and he has managed to inject a degree of dynamism into a system accustomed to a more leisurely pace. Estimating outcomes from these visits is, however, more difficult. One can easily see the contrast in outcomes in his two most recent visits.

1.U.S. tilts towards transactional rather than strategic aspects.

The U.S. visit was a carefully calibrated one, concentrating mainly on counter-terrorism and the defence security partnership, avoiding contentious trade-related issues.

This being the first ever visit by an Indian Prime Minister to that country, the euphoria of the standalone visit, de-hyphenating Israel from Palestine, was understandable.

It also produced better dividends, including elevation of the India-Israel relationship to the level of a ‘strategic partnership’.

The main focus of the visit was on

Most of the agreements signed related to transfer of technology and innovative technology-related items and India expects to benefit substantially, considering that Israeli export rules are far more flexible than those of the U.S.

Both countries also expressed a strong commitment to combat terror.

The reality, however, is somewhat different.

Two countries where India’s diplomacy, despite the impetus given to it, is currently facing heavy odds are China and Pakistan.

In the case of Pakistan,

The implosion of the state arising from its internal stresses and problems, together with the virtual standoff between India and Pakistan has enabled the Pakistani Deep State to further entrench itself.

Despite India’s commanding presence in South Asia, China has been successful in winning quite a few friends among India’s neighbours such as Bangladesh, Nepal, Sri Lanka and the Maldives.

It is a moot point whether India and Indian diplomacy can do something to rectify matters in the above context, but for the present it confronts Indian diplomacy with one more serious dilemma.

The problem for India and Indian diplomacy is that at this time India-Russia relations appear less robust than at any time in the past half century.

Policies have given a new dimension to Indian diplomacy in both East and West Asia.

A series of confrontations between an increasingly powerful Shiite Iran and a weakening Saudi Arabia will impact India adversely and Indian diplomacy’s inability to make its presence felt will matter.

Closer relations with countries in East and South East Asia, especially Japan and Vietnam, are a positive development.

However, in the Asia-Pacific, India has to contend with an increasingly assertive China.

Our Prime minister’s diplomatic styles have changed but it would seem that the substance has altered little. His recent visit to Israel was, no doubt, a resounding success, but Israel was already one of the very few countries which had shown a complete understanding of India’s defence and security needs, even ignoring the sanctions imposed on India by some countries. Israel’s supply of critical defence items during the Kargil conflict (of 1999) is an excellent example.

What Indian diplomacy currently needs to do is to find a way to steer amid an assertive China, a hostile Pakistan, an uncertain South Asian and West Asian neighbourhood, and an unstable world. The strategic and security implications of these, individually and severally, need to be carefully validated and pursued. Indian diplomacy may possibly need to display still higher levels of sophistication to overcome the odds.