Amendments to the Electricity Act, 2003

The Union Cabinet, chaired by the Prime Minister, recently approved the various amendments to the Electricity Act, 2003 as per the proposed Electricity (Amendment) Bill, 2014.

Important provisions of the Bill:

Why are these amendments necessary?

Mechanism for procurement of ethanol

The Cabinet Committee on Economic Affairs (CCEA), chaired by the Prime Minister, has approved a mechanism for procurement of Ethanol by Public Sector Oil Marketing Companies (OMCs) to carry out the Ethanol Blended Petrol (EBP) Program.

The CCEA approved replacing the current procedure on ethanol with the following:

It was launched in 2003, which was extended to the entire country except NE States, J&K, A&N Islands and Lakshadweep in 2006.

A National Policy on Bio-fuels was also notified by the Government in 2009 with the objective to ensure that minimum level of bio-fuels is readily available to meet the demand at any given time.

There are certain advantages of blending Ethanol with Petrol:-

In order to give fillip to the EBP program, the Government, inter alia, decided in November 2012 that 5% Ethanol blending with Petrol should be implemented across the country; procurement price of Ethanol will be decided between OMCs and the suppliers of Ethanol.

Constraints in implementing the EBP program:

The present mechanism of procurement of Ethanol based on a benchmark price decided by OMCs may be replaced by a new mechanism of uniform price of Ethanol declared for each sugar year.

The Union Cabinet, chaired by the Prime Minister, has approved the scheme for setting up 25 solar parks each with a capacity of 500 MW and above and Ultra Mega Solar Power Projects in various parts of the country where large chunks of land can be spared for this purpose.

The scheme for development of Solar Parks and Ultra Mega Soiar Power Projects has been conceived on the lines of the “Charanka Solar Park” in Gujarat which is a first-of-its-kind large scale Solar Park in India with contiguous developed land and transmission connectivity.

The objectives of Unnat Bharat Abhiyan are broadly two-fold:

Under this programme, 132 villages have been identified for intervention by 16 institutes of higher education so far.

India ranks behind China and other BRICS nations in a comprehensive index aimed at measuring the Internet’s contribution to social, economic and political progress.

Web Index released by the World Wide Web Foundation says that though China is notorious for its great Internet firewall, the nation is far ahead of India when it comes to translating the power of the Internet into economic potential.

India’s low ranking among BRICS countries in the “economic impact” sub-index is especially stinging, coming as it does on the heels of the Delhi government’s decision to ban all app-based taxi services. 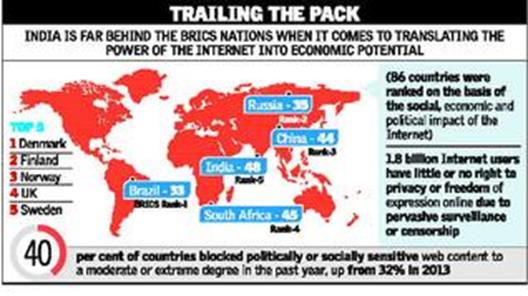 The Global status report on violence prevention for 2014 reveals that 4,75,000 people were murdered in 2012, and homicide is the third leading cause of death globally for men aged 15-44, highlighting the urgent need for more decisive action to prevent violence.

Despite indications that homicide rates decreased by 16% globally, between 2000 and 2012, violence remains widespread.

The report is the first of its kind to assess national efforts to address interpersonal violence, namely child maltreatment, youth violence, intimate partner and sexual violence, and elder abuse. Country profiles reflect the extent to which key violence prevention programmes and laws and selected services for victims of violence are being implemented.