China and the United States have agreed to limit emission of greenhouse gases. This decision is expected to impose fresh pressure on India to not obstruct a binding treaty on climate change next year.

The U.S. has agreed to reduce its emission of greenhouse gases by 26 to 28 per cent below its 2005 level, by 2025. China stated its intent to peak emissions of carbon dioxide in 2030, if not earlier. It also agreed to raise the share of non-fossil fuels to 20 per cent, in its primary energy mix, in the next 16 years. This would entail China shifting massively towards clean energy from nuclear, wind, solar and other zero-emitting resources.

The new deal puts pressure on India to decide on whether it wants to toe this line or create a new target for itself and also pressure the world to adopt stringent emission cuts. The joint announcement could impose fresh pressure on India not to become a deal breaker in the run up to the Paris talks. India’s per capita emissions are estimated at one-tenth of the United States and one-fourth of China, but, without a significant shift towards non-fossil fuels, its carbon footprint could rise substantially between 2020-2040, out of sync with global expectations.

The agreement that comes after months of talks will however, not impact the stand of the BASIC (Brazil, South Africa, India and China) group demanding that the developed world walk the talk by cutting emissions, funding technology transfer and operationalising the Green Climate Fund.

There has been a mixed response from Indian experts to the U.S.-China agreement on a timetable for emission cuts.

The deal can tilt the scales at negotiations at the UN climate conference slated for Paris in 2015. Three years ago, leaders from 200 countries had agreed to finalise an agreement in Paris, which would replace the Kyoto protocol — the only legally binding treaty on cutting emissions, signed in 1997. 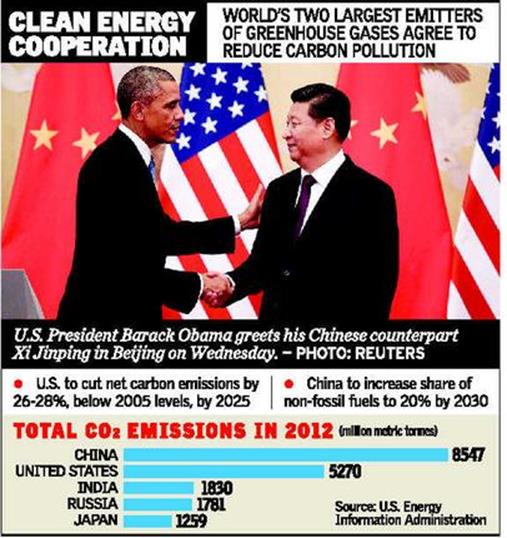 The Kyoto Protocol is an international agreement linked to the United Nations Framework Convention on Climate Change, which commits its Parties by setting internationally binding emission reduction targets.

Recognizing that developed countries are principally responsible for the current high levels of GHG emissions in the atmosphere as a result of more than 150 years of industrial activity, the Protocol places a heavier burden on developed nations under the principle of “common but differentiated responsibilities.”

The Kyoto Protocol was adopted in Kyoto, Japan, on 11 December 1997 and entered into force on 16 February 2005. The detailed rules for the implementation of the Protocol were adopted at COP 7 in Marrakesh, Morocco, in 2001, and are referred to as the “Marrakesh Accords.” Its first commitment period started in 2008 and ended in 2012.

In Doha, Qatar, on 8 December 2012, the “Doha Amendment to the Kyoto Protocol” was adopted. The amendment includes:

The Adaptation Fund was established to finance adaptation projects and programmes in developing countries that are Parties to the Kyoto Protocol. In Doha, in 2012, it was decided that for the second commitment period, international emissions trading and joint implementation would also provide the Adaptation Fund with a 2 percent share of proceeds.

The Kyoto Protocol is seen as an important first step towards a truly global emission reduction regime that will stabilize GHG emissions, and can provide the architecture for the future international agreement on climate change.

On revenue, a target too far

The Centre has said it is unlikely to meet its budget target for tax collection for the third year in a row.

The collection of indirect tax revenue — mainly excise duty, service tax and customs duties — during April-October 2014 was 5.6 per cent over the corresponding period the previous year.

Indirect tax is a tax collected by an intermediary (such as a retail store) from the person who bears the ultimate economic burden of the tax (such as the consumer). The intermediary later files a tax return and forwards the tax proceeds to government with the return. In this sense, the term indirect tax is contrasted with a direct tax which is collected directly by government from the persons (legal or natural) on which it is imposed.

The decline in revenues from all indirect taxes, according to economic survey, was mainly on account of general economic slowdown, reduction in duty rates (both customs and excise), lower volume of imports of dutiable goods, and various exemptions.

This urgently calls for revenue augmentation measures like withdrawal/rationalization of tax exemptions; broadening of tax base; cautious approach while signing Free Trade Agreements; increasing compliance through deterrence; simplification of tax laws; liquidation of locked revenue and recovery of arrears; and speedy disposal of pending cases.

The European Space Agency said it has succeeded in landing a spacecraft on a comet for the first time in history.

The landing on the speeding comet marks the highlight of the decade-long Rosetta spacecraft’s mission to study comets and learn more about the origins of these celestial bodies.

The landing capped a 6.4 billion-kilometer journey by the European Space Agency’s Rosetta spacecraft, launched a decade ago to study the four-kilometer-wide 67P/Churyumov-Gerasimenko comet. Philae was supposed to drift down to the comet and latch on using harpoons and ice screws. 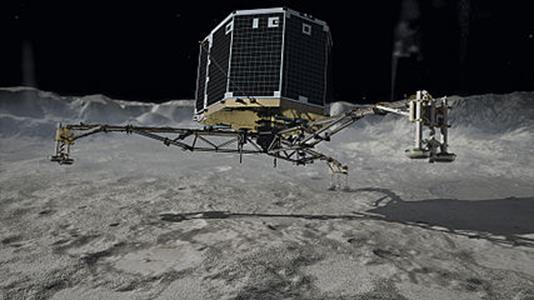 Rosetta was launched on 2 March 2004 on an Ariane 5 rocket and reached the comet on 6 August 2014, becoming the first spacecraft to orbit a comet.
Rosetta took off from Earth 10 years ago carrying Philae and traveled 6.4 billion miles before arriving in early August at the comet.

Philae ‘​s mission was to land successfully on the surface of a comet, attach itself, and transmit data from the surface about the comet’s composition. It is a robotic European Space Agency lander.

The scientific goals of the mission focus on “elemental, isotopic, molecular and mineralogical composition of the cometary material, the characterization of physical properties of the surface and subsurface material, the large-scale structure and the magnetic and plasma environment of the nucleus. Sensors on the lander will measure the density and thermal properties of the surface, gas analyzers will help detect and identify any complex organic chemicals that might be present, while other tests will measure the magnetic field and interaction between the comet and solar wind.

Philae is equipped with an array of experiments to photograph and test the surface of Comet 67P as well as to find out what happens when the roasting effect of the sun drives off gas and dust. 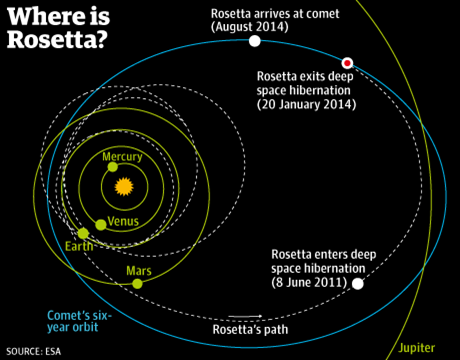 Scientists analysed a set of satellite imagery to discover mangrove, an unlikely ecological wealth on Karnataka’s coast that successive forest surveys of India have completely missed out.

The State has a sizeable stretch of mangrove forests, a vibrant saline-water ecosystem generally associated with India’s east coast. Researchers have identified 300 hectares of mangrove forest in Karnataka, spread over three coastal districts.

Mangrove shrubs, known best for a thriving aquatic life nurtured within their mesh of stilt-roots also serve a vital socio-economic function. They act as “green shields” buffering the coastline against sea erosion, and the potentially devastating impacts of cyclones and tsunami.

Its impact-reducing potential was best evident along the east coast after tsunami struck India in December 2004. The team looked at high spatial resolution, multi spectral data to infer the geographical distribution and status of mangroves, including plant species, along the coast. And they found that while mangroves have been declining in several parts of the world from timber harvesting and pollution, these forests in Karnataka have in fact grown spatially over the last two decades.

The study has said that the successful rejuvenation of mangroves owes entirely to local conservation efforts, both by forest officials and communities, in reforestation and protection.

A devastating super cyclone of 1999, followed by the 2004 tsunami raised awareness about the irreplaceability of mangroves. The study also notes that the rate of expansion indicates the mangrove’s resilience and ability to occupy new habitats. A decline in shrimp culture in the 1990s led to a natural regeneration of mangroves, aided by reforestation with select mangrove species.

According to the study, the value of an estuary is calculated as $19120 per hectare per year if all “goods and services” are taken into account: shrimps, fish and crabs; mangrove shrubs; nutrient cycling, hydrology, soil protection and a sink for carbon.

Mangroves in India account for about three per cent of the world’s mangrove vegetation. Mangrove cover in India is 4,662 sq. km, which is 0.14 per cent of the country’s total geographical area. Sundarbans in West Bengal accounts for almost half of the total area under mangroves in the country. The Sundarbans covers approximately 10,000 square kilometres of which 60 percent is in Bangladesh with the remainder in India. The Sundarbans is a UNESCO World Heritage Site.

The forest survey report, 2013, notes down that the overall Mangrove cover in the county in 2013 has decreased compared to 2011.The reasons for the decrease in the mangrove cover may be

Mangrove in India is famous for its rich variety of flora and fauna.

Role of El Nino in heat build-up in Indian Ocean

Recent studies show that a warm Indian Ocean can in turn modulate the Pacific conditions including the El Nino events. And such large warming over the Indian Ocean has implications on the global climate.

A recent study focused on the causes for this warming and found that it was mainly due to El Nino events, which are getting stronger and more frequent during recent decades, possibly due to a changing climate.

These El Nino events weaken the summer westerly (blowing from west to east) winds over the Indian Ocean. Winds have the effect of cooling the sea surface. Strong winds cause evaporation and loss of latent heat from the ocean leading to cooling. When the winds are weakened the opposite happens — the ocean warms.

The study found that the ocean atmospheric phenomenon — the El Nino, and its influence on the Walker Circulation were responsible for periodic weakening of monsoon westerlies and led to abnormally high summer sea surface temperatures in the western Indian Ocean.

Unlike the Pacific or the Atlantic Oceans, the Indian Ocean is land-locked on the north. This means that the ocean circulation which carries the tropical heat towards the poles is restricted in the Indian Ocean, withholding the piled up heat.

Understanding EL NINO AND LA NINA Phenomena and Their Implication on India:http://insightsonindia.com/2014/06/26/understanding-el-nino-la-nina-phenomena-implication-india/.