Treaty on transfer of sentenced persons between India and Nigeria

The Cabinet meeting chaired by the Prime Minister gave its approval for signing a treaty on transfer of sentenced persons between India and Nigeria.

The treaty shall facilitate Indian prisoners imprisoned in Nigeria or vice-versa to be near their families, for serving the remaining part of their sentence and shall facilitate their social rehabilitation.

Prior to 2004, there was no domestic legislation under which foreign prisoners could be transferred to the country of their origin, to serve the remaining part of their sentence, nor was there a provision for the transfer of prisoners of Indian origin convicted by a foreign court to serve their sentence in India.

Hence the Repatriation of Prisoners Act, 2003 was enacted for serving this purpose. For achieving the objectives of the Act, a treaty/agreement is required to be signed with countries having mutual interest with India.

The Union Cabinet has approved the Ministry of Shipping`s proposal for introducing `official amendments` to the Merchant Shipping (Amendment) Bill 2013.

The amendments incorporate the recommendations of the department-related Parliamentary Standing Committee and for accession to the Anti Fouling Systems (AFS) Convention 2001 of the International Maritime Organization (IMO) after enactment of the Bill.

By acceding to the AFS Convention, all Indian flag sea going vessels having 400 gross tonnage or more, would be issued with an International Anti-Fouling System Certificate, after due verification. This will enable them to engage in international shipping activities without having to approach other governments, who have ratified the Convention for such certificates. There are no financial implications involved.

Further, India will be able to ensure that all foreign flag vessels entering Indian territorial waters or the Exclusive Economic Zone are duly certified in accordance with the requirement of the AFS Convention 2001.

Anti-fouling paints are used on the ship`s surface to control the growth of foulant organisms, such as barnacles, mussels, oysters, tube worms, etc which affect the speed of ships. Such use of anti-fouling paints, when persistent in the water, leads to “leaching” into sea-water. This harms the marine environment in contravention to the precautionary approach set out in Principle 15 of the Rio Declaration on Environment and Development.

Ships are also needed to comply with the Convention through holding a Maritime Labour Certificate. Indian flag merchant vessels of 500 gross tonnage or more and engaged in international voyages will be issued a Maritime Labour Certificate after an inspection of the ship concerned. This will enable them to receive preferential treatment and exemption from inspection, for this purpose, at foreign ports. Besides, India will be able to ensure that-all foreign flag vessels entering Indian territorial waters or maritime areas over which India has jurisdiction are subject to an inspection under the Maritime Labour Convention 2006 and ensure that rights of all seafarers (regardless of their nationality) are protected.

It was for the first time that a fishery in India has been awarded the certification.

Ashtamudi Lake, a Ramsar Wetland of international importance, is the second largest estuarine system in Kerala. It has extensive mangrove habitats harbouring nearly 90 species of fish and 10 species of clams. The clam fishery in Ashtamudi dates back to 1981 and supports the livelihoods of around 3000 fishers involved in collection, cleaning processing and trading the clams.

As part of its preparations for MSC-assessment, Ashtamudi clam fishers formed the Village Clam Fishery Council to develop management measures and officially represent the fishery at regional and state level. Certification of the fishery demonstrates the power of collaboration between partners and the importance of grass-roots activism of fishers to protect the environment and their livelihoods.

When buyers choose to purchase MSC certified fish, fisheries are rewarded for sustainable practices. In this way, the MSC programme helps to harness market forces to incentivise positive environmental change. Over 3,000 fishers are involved in clam fishery in the lake.

The achievement of MSC certification will mean the implementation of measures to ensure that this valuable resource is not overfished and its ecosystem is protected. It also opens up the scope for other fisheries in India to work towards MSC certification that will enhance conservation and sustainability of the resource while providing greater economic returns.

This demonstrates the importance of supporting small scale and high value fisheries as a niche market that supports sustainability of resource use. It is also an excellent example of an initiative that supports the objectives of the Convention on Biological Diversity.

Clams belong to the group of animals called bivalves, which includes clams, mussels, oysters, and scallops. The soft body parts of these animals are enclosed between two shells; hence, the word bivalve. Bivalves are closely related to limpets, abalone, snails, slugs, squids, and octopuses. These animals, including bivalves, are collectively called mollusks. 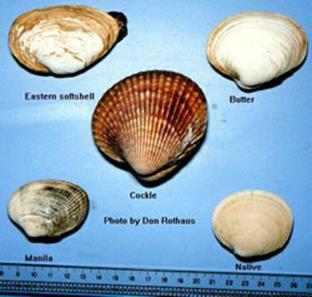 The clam lives in muddy sediments in subtidal areas ranging in depth from less than a meter to 10-15 meters. They can also be found inside the mouths of tidal creeks where water is retained near the mouth of the creek. Larval clams will settle in areas where adult clams are present, which may result in dense, patchy populations.

The harvesting techniques include harvesting by hand and handgrabs as well as “treading,” which involves individuals feeling around with their feet. Mechanical hydraulic escalators are generally used in deeper areas and can harvest hundreds of bushels per day in productive beds.

The Supreme Court has issued a notice to the Tamil Nadu government on a petition filed by two aspiring medical students challenging the State’s 69 per cent reservation policy in educational institutions and government jobs, saying it violated their fundamental right to education.

The petition questioned the State legislature’s competence to pass the Tamil Nadu Backward Classes, Scheduled Caste and Scheduled Tribes (Reservation of seats in educational institutions and appointments or posts in the service under the state) Act, 1993 (Act 45 of 1994).

In their petition, the students questioned the competence of the Tamil Nadu legislature to venture beyond the 50 per cent reservation prescribed by the Supreme Court in the Indira Sawhney majority judgment of 1992.

It said that the State legislature went on to increase the reservation quota to 69 per cent though there was no preceding constitutional amendment.

The petition said the 1994 statute has been amended twice — in the year 2007 to provide exclusive reservation for backward class Muslims and in 2009 for the Arunthathiyar community. The petition further contended that the Tamil Nadu Backward Classes Commission’s report dated July 8, 2011 justifying 69 per cent reservation on the basis of data of the year 1985, provided in the report of the previous backward class commission is unsustainable and a constitutional fraud.

The petition also contended that in any event, a meritorious candidate coming within the cut-off mark of 50 per cent reservation cannot be denied her right of admission under Articles 14 and 15.

The Supreme Court, in its 16 November 1992 judgment in the Indra Sawhney case, ruled that reservations in promotions are unconstitutional, but allowed its continuation for 5 years as a special case.

The apex court reiterated the law laid down through various judgements by the Constitution benches in the M Nagaraj, Indra Sawhney and other cases wherein it was declared that reservation in promotions can be provided only if there is sufficient data and evidence to justify the need.

The reservation system in Tamil Nadu is much in contrast to the rest of India.

At present, reservation works out to somewhat less than 69%, depending on how many non-reserved category students are admitted in the super-numerary seats. If 100 seats are available, first, two merit lists are drawn up without considering community (reserved or unreserved), one for 31 seats and a second for 50 seats, corresponding to 69% reservation and 50% reservation respectively. Any non-reserved category students placing in the 50 seat list and not in the 31 seat list are admitted under super-numerary quota (i.e.) seats are added to the 100 for these students. The 31 seat list is used as the non-reserved open admission list and 69 seats are filled up using the 69% reservation formula (30 seats obc, 20 seats mbc, 18 seats sc and 1 seat st).

The Union government reconstituted the Prime Minister’s Council on Climate Change on recently to coordinate the National Action Plan for Assessment, Adaptation and Mitigation of Climate Change.

It is the 18-member council with Prime Minister acting as its Chairperson.

The council also includes Ministers for External Affairs, Finance, Environment, Forests and Climate Change, Agriculture, Science and Technology, and Water Resources, River Development and Ganga Rejuvenation and the Cabinet Secretary, the Foreign Secretary, the Principal Secretary to the Prime Minister.

Functions of the Council:

The Ministry of Environment, Forests and Climate Change will assist the Prime Minister’s Office in facilitating the work of the council. 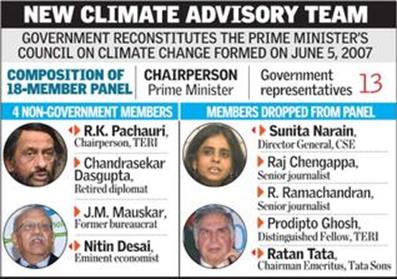 Results from a recent pre-clinical trial have shown that a single dose of a non-injectable vaccine provided long-term protection for non-human primates against the Ebola virus.

Researchers said that a breathable vaccine could surmount the logistical obstacles of storing, transporting and administering injectable vaccines in parts of Africa most afflicted by the virus.

Researchers in the new study have worked over seven years to develop a respiratory formulation that improved survival of immunised non-human primates from 67 per cent to 100 per cent after challenge with 1,000 plaque forming units of Ebola Zaire 150 days after immunisation. This improvement is statistically significant because only 50 per cent of the primates given the vaccine by the standard method of intramuscular injection survived challenge.

Ebola causes devastating outbreaks with fatality rates of 25 to 90 per cent in Africa and Asia. Although progress has been made in understanding the virus’ biology, no licensed vaccines or treatments currently exist. The current Ebola outbreak has killed almost 5,000 people.

This is important since the longevity of other vaccines for Ebola that are currently being evaluated is not fully evaluated.