The Global Slavery Index 2013, which surveyed 162 nations, was compiled by Australia-based rights organisation Walk Free Foundation using a definition of modern slavery that includes debt bondage, forced marriage, trafficked into brothels and the use of children in the military.

The Foundation’s estimate of 29.8 million slaves worldwide is higher than other attempts to quantify modern slavery. The UN estimates almost 21 million people are victims of forced labour.

Infants to get free treatment till age one in Rajasthan

Extending the scope of the Janani Shishu Suraksha Yojana (JSSY) with an aim to bring down the infant mortality rate (IMR) in the State, the Rajasthan government has decided to provide free treatment to newborns till they complete one year. This will include diagnostics, medicine and free transportation facilities.

The scheme is applicable to all children born in public health facilities. The decision comes amidst reports of suspected diphtheria deaths in Alwar district over the past few days.

The JSSY, launched in 2011, provides free treatment for a mother and her newborn for up to one month in a public healthcare facility.

Diphtheria is a bacterial infection that affects the membranes of the throat and nose. Although it spreads easily, diphtheria can be prevented through the use of vaccines. If left untreated, diphtheria can cause severe damage to kidneys, nervous system, and heart.

Diphtheria is caused by the corynebacterium diphtheriae bacterium. It is most commonly spread through person-to-person contact or contact with items that have the bacteria on them. Coming into contact with items such as an infected person’s cup or used tissue can transfer the bacteria. The mist exhaled by an infected person’s sneeze or cough can also contain the bacteria. Diphtheria is an infectious disease spread by direct physical contact or breathing the aerosolized secretions of infected individuals.

With the use of antibiotics and vaccines, diphtheria is not only treatable, but preventable as well.

Signs of diphtheria often appear two to five days after infection. The most common and visible symptom is a thick, gray coating on throat and tonsils. Other common symptoms include:

Diphtheria of the skin usually presents as redness in the affected area and ulcers that may be covered with a gray membrane like the one found in the throat.

Ministry of Finance, Department of Expenditure has been issuing austerity instructions from time to time with a view to containing non-developmental expenditure and releasing of additional resources for priority schemes. Such measures are intended at promoting fiscal discipline, without restricting the operational efficiency of the Government. In the context of the current fiscal situation, there is a need to continue to rationalise expenditure and optimize available resources. With the same objective, the following measures for fiscal prudence and economy have been announced:

For the year 2014-15, every Ministry / Department shall effect a mandatory 10% cut in non-Plan expenditure excluding interest payment, repayment of debt, Defence capital, salaries, pension and Finance Commission grants to the States. No re-appropriation of funds to augment the Non-Plan heads of expenditure on which cuts have been imposed shall be allowed during the current fiscal year.

Utmost economy shall be observed in organizing conferences/Seminars/workshops. Only such conferences, workshops, seminars, etc. which are absolutely essential, should be held wherein also a 10% cut on budgetary allocations (whether Plan or Non-Plan) shall be effected.

There will be a ban on holding of meetings and conferences at five star hotels except in case of bilateral/multilateral official engagements to be held at the level of Minister-in-Charge or Administrative Secretary, with foreign Governments or international bodies of which India is a Member. The Administrative Secretaries are advised to exercise utmost discretion in holding such meetings in 5-Star hotels keeping in mind the need to observe utmost economy in expenditure.

Purchase of new vehicles to meet the operational requirement of Defence Forces, Central Paramilitary Forces & security related organizations are permitted. Ban on purchase of other vehicles (including staff cars) will continue except against condemnation.

Travel expenditure {both Domestic Travel Expenses (DTE) and Foreign Travel Expenses(FTE)} should be regulated so as to ensure that each Ministry remains within the allocated budget for the same after taking into account the mandatory 10% cut under DTE/FTE (Plan as well as Non-Plan). Re-appropriation augmentation proposals on this account would not be approved.

While officers are entitled to various classes of air travel depending on seniority, utmost economy would need to be observed while exercising the choice keeping the limitations of budget in mind. However, there would be no bookings in “First Class.” In all cases of air travel, the lowest air fare tickets available for entitled class are to be purchased/procured. No companion free ticket on domestic/ international travel is to be availed of.

The Kerala High Court has upheld the liquor policy of the State government, but allowed bars in four-star and heritage hotels to function in addition to those in five-star and higher categories.

The court, however, ratified the government decision not to renew the licences of bars in two and three-star, and other hotels.

The judge said the proposal to shut down bars in four-star and heritage hotels surfaced all of a sudden in the liquor policy of 2014-15. The preferential treatment given to the bars in hotels in five-star and higher categories could not be justified as well. 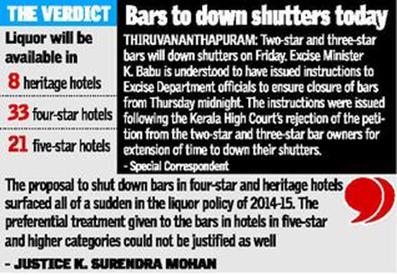 The new liquor policy was envisaged to shut down bars attached to hotels below the five-star category as part of its plans to reduce availability of liquor. And according to the policy 10 per cent of the retail liquor stores in the state would be closed every year till there is none left by 2023.

Only case-specific information can be disclosed: Switzerland

Amid a debate on disclosure of names of suspected black money holders, Switzerland has said that information exchanged under the Swiss-India tax treaty cannot be disclosed “in principle” to a court or any other body outside the proceedings of a “specific and relevant” case.

The comments come at a time when a Supreme Court-monitored Special Investigation Team is probing alleged stashing of black money by Indians abroad, including Swiss banks. Switzerland, long accused of being a safe haven for illicit funds, has promised to extend assistance to India and reply to requests for information in a “time-bound” manner on cases of alleged tax evasion and financial crimes, or provide a reason if no information can be shared.

The protocol to Swiss-Indian DTA (Double Taxation Agreement) states that any information received “by a contracting state shall be treated as ‘secret’ in the same manner as information obtained under the domestic laws of that state.” The treaty further provides that any such information “shall be disclosed only to persons or authorities (including courts and administrative bodies) concerned with the assessment or collection of (information), the enforcement or prosecution in respect of, or the determination of appeals in relation to the taxes… or the oversight of the above.” The treaty states that “such persons or authorities shall use the information ‘only’ for such purposes. They may disclose the information in public court proceedings or in judicial decisions.”

Accordingly, the information exchanged under the terms of the DTA can be provided to a Court in situations where it is dealing with a specific case related to tax matters for which this information is relevant. Conversely, information cannot be disclosed in principle outside of such proceedings.

Governor of Maharashtra has ordered the withdrawal of the controversial notification issued by the Congress-NCP government taking the Anti-Corruption Bureau (ACB) out of the purview of the Right to Information (RTI) Act.

The Governor took the decision to withdraw the notification issued by the State Government after considering representations from various RTI activists and taking cognizance of newspaper reports which reflected the view that the notification was in violation of the RTI Act.

The controversial notification was issued by the General Administration Department (GAD) under the charge of the then Chief Minister just six days before the model code of conduct came into force. It drew flak from RTI activists as the anti-corruption body was awaiting sanction from the government to commence an open inquiry against some influential political leaders of Maharashtra in the alleged multi-crore irrigation scam.