The Union Cabinet recommended the promulgation of an Ordinance to acquire the land of 214 coal blocks mines whose allocations were quashed by the Supreme Court.

It also approved a plan for e-auctioning the cancelled blocks to end-user private players of coal from the power, steel and cement sectors. Government entities, including public sector units such as NTPC and State Electricity Boards, however, will not have to go through the auction route as a pool of coal mines will be reserved for allocation to them from the cancelled blocks.

The Cabinet’s decisions are with the view of cleaning up the coal mess due to allocations via the screening committee mechanism that the Supreme Court quashed.

The proceeds from the e-auction of coal mines will go entirely to the States where they are located — mainly in Jharkhand, Odisha, West Bengal and Chhattisgarh. And this would lead to financial empowerment of these States.

The land to be acquired back from owners of mines that stand de-allocated following the Supreme Court ruling would be valued by an independent authority under the Coal Nationalisation Act.

The expeditious disposal of the process will provide a huge impetus to the manufacturing sector and the country will save precious foreign exchange on coal imports and this will also help banks that have funds stuck as a fallout of the Supreme Court’s verdict. 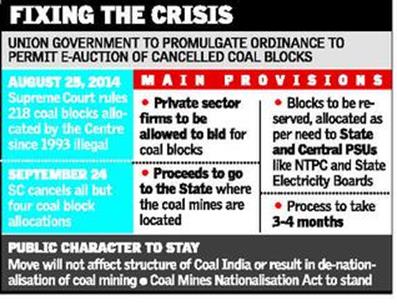 The Australian National University (ANU) announced that Laser physicists in Australia have built a tractor beam that can repel and attract objects, using a hollow laser beam that is bright around the edges and dark in its centre.

It is the first long-distance optical tractor beam and moved particles one-fifth of a millimetre in diameter a distance of up to 20 cm, around 100 times further than previous experiments.

The new technique is versatile because it requires only a single laser beam. It could be used, for example, in controlling atmospheric pollution or for the retrieval of tiny, delicate or dangerous particles for sampling.

Unlike previous techniques, which used photon momentum to impart motion, the ANU tractor beam relies on the energy of the laser heating up the particles and the air around them.

The particles are trapped in the dark centre of the beam. Energy from the laser hits the particle and travels across its surface, where it is absorbed creating hotspots on the surface.

Air particles colliding with the hotspots heat up and shoot away from the surface, which causes the particle to recoil, in the opposite direction.

A tractor beam is a device with the ability to attract one object to another from a distance. 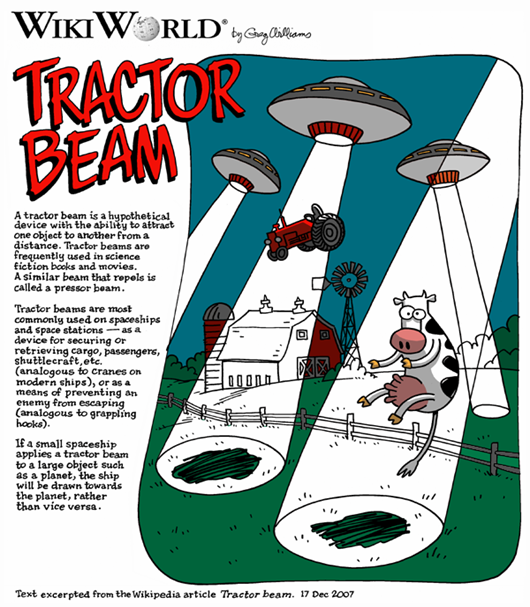 Tractor beams are most commonly used on spaceships and space stations. They are generally used in two ways:

Tractor beams and pressor beams can be used together as a weapon: by attracting one side of an enemy spaceship while repelling the other, one can create severely damaging shear effects in its hull. Another mode of destructive use of such beams is rapid alternating between pressing and pulling force in order to cause structural damage to the ship as well as inflicting lethal forces on its crew.

Swasthya Bima Yojana to be merged with UHAM

The Rashtriya Swasthya Bima Yojana (RSBY), which insures families of unorganised sector workers for up to Rs. 30,000 of medical care, is expected to be transferred from the Ministry of Labour and Employment to the Union Health Ministry.

The RSBY, operationalised in 2008 by the UPA government, will be merged with the Universal Health Assurance Mission (UHAM) proposed by the NDA government.

The scheme, which covers secondary care, hospitalisation expenses up to Rs. 30,000 at empanelled public and private hospitals at present, is set to be expanded to include tertiary care for major surgeries, accompanied by increasing coverage beyond Rs. 30,000.

The Labour Ministry had identified three main challenges — not enough hospitals were empanelled in blocks and districts, pathways for disease to be outlined to avoid hospitals carrying out unnecessary medical procedures and insurance companies had not been paid dues on time.

RSBY has been launched by Ministry of Labour and Employment, Government of India to provide health insurance coverage for Below Poverty Line (BPL) families.

The objective of RSBY is to provide protection to BPL households from financial liabilities arising out of health shocks that involve hospitalization. Beneficiaries under RSBY are entitled to hospitalization coverage up to Rs. 30,000/- for most of the diseases that require hospitalization. Government has even fixed the package rates for the hospitals for a large number of interventions. Pre-existing conditions are covered from day one and there is no age limit. Coverage extends to five members of the family which includes the head of household, spouse and up to three dependents. Beneficiaries need to pay only Rs. 30/- as registration fee while Central and State Government pays the premium to the insurer selected by the State Government on the basis of a competitive bidding.

The scheme has won plaudits from the World Bank, the UN and the ILO as one of the world’s best health insurance schemes.

The RSBY scheme differs from other schemes in several important ways.

The licencee shall be allowed to sell defence items to government entities under the control of ministry of home affairs, state governments, public sector units and other valid defence licensed companies without prior approval of the Department of Defence Production (DoDP).

However, it said, for sale of the items to any other entity, the licencee shall take prior permission from DoDP. The government also decided to deregulate the annual capacity for production of defence items by industrial licencees with the condition that licencees shall submit half-yearly production returns to the Department of Industrial Policy and Promotion and DoDP.

As a measure of ease of doing business, two extensions of two years each in the initial validity of three years of the industrial license would be allowed up to seven years.

Earlier, the government had raised FDI cap in the defence sector to 49 per cent from existing 26 per cent and allowed even beyond that limit on a case-to-case basis if results in infusion of state- of-art technology.

The steps would help India in improving its ranking the ease of doing business and attract investments in the defence sector.
According to a World Bank report, India has slipped three positions to 134th spot in the latest ‘ease of doing business’ list, which is topped by Singapore.