The Union Cabinet chaired by the Prime Minister gave its ex-post facto approval for the payment of Productivity Linked Bonus (PLB) equivalent to 78 days` wages for the financial year 2013-14 to all eligible non-gazetted Railway employees.

The PLB on Railway covers all non-gazetted Railway employees (excluding RPF/RPSF personnel) throughout the country.

The Railways were the first departmental undertaking of the Government of India where the concept of PLB was introduced. The main consideration at that time was the important role of the Railways as an infrastructural support in the performance of the economy as a whole. In the overall context of Railway working, it was considered desirable to introduce the concept of PLB as against the concept of Bonus on the lines of the Payment of Bonus Act -1965. Even though the Payment of Bonus Act does not apply to the Railways, yet the broad principles contained in that Act were kept in view for the purpose of determining the “Wage/Pay Ceiling”, definition of `Salary`/`Wage`, etc.

The PLB Scheme for the Railways came into force from the year 1979-80 onwards and was evolved in consultation with the two recognised federations, the All India Railwaymen`s Federation and National Federation of Indian Railwaymen and with the approval of the Cabinet. The scheme envisages a review every three years.

The salient features of the new Gas Pricing Policy are follows:

The Committee, which was constituted to look into the matters relating to
the Domestic Natural Gas Pricing Guidelines, has recommended an approach for gas price determination, which is based on the modification to the Rangarajan formula by:

The Committee also recommended applicability of the modified approach prospectively and to apply it uniformly to all sectors of the economy, along with prevailing gas allocation policy of the Government. The Committee was of the view that the National Oil Companies (NOCs) may also get the same price as determined under the proposed dispensation, including the gas from the nomination fields. In addition, the Committee also drew attention to the fact that although in India gas is historically being priced on National Calorific Value (NCV), the input prices being used in the Rangarajan formula are based on Gross Calorific Value (GCV).

Policy Framework for Relaxations, Extensions and clarifications under PSC regime for early Monetization of hydrocarbon discoveries

The Cabinet Committee of Economic Affairs, chaired by the Prime Minister approved the proposal of Ministry of Petroleum and Natural Gas regarding “Policy Framework for Relaxations, Extensions and clarifications at the Development and Production stage under PSC regime for early Monetization of hydrocarbon discoveries”.

Under the Production Sharing Contracts (PSC), there is commitment on the part of the contractor to carry out Minimum Work Programme (MWP) specified under each exploration phase.

These are reform initiatives which would help in monetization of some of the pending discoveries, lead to resolution of various long pending operational issues which are hampering E&P operations and create better climate for investment. The salient features of this Reform Measure are as follows:-

These changes do not change the basic structure of the PSC and have been approved in the overall interest of the energy security of the country.

These proposals are expected to yield the following benefits:

‘Jammu Kashmir Arogya Gram Yojana’ was launched recently under which the CSIR (Council for Scientific & Industrial Research), affiliated with the Ministry of Science & Technology, will identify thousand villages in Jammu & Kashmir for the growth of aromatic plants with active participation of local farmers and owners of the land. The Government will initially spend over Rs.25 crores on this scheme in addition to technical support by a team of CSIR scientists.

This scheme is a new concept whereby the agricultural land with the potential for growth of aromatic plants will be identified and CSIR scientists as well as aroma experts from different parts of the country will educate and train the local farmers to bring up this cultivation. This will not only enable the local farmers to usher in a new area of cultivation but will also prove economically beneficial to them since the net profit for the farmers through this venture has been estimated to be Rs. 1 – 1.5 lakhs per hectare per annum.

one of the important reasons to start this new scheme from Jammu region was that the IIIM (Indian Institute of Integrative Medicine), Jammu has been actively pursuing research and production of aromatic medicinal and perfumery products for several decades and some of the products produced from this laboratory are of international export quality. Nine varieties of scientifically tested and commercially beneficial plant saplings will be provided by IIIM Jammu and under the guidance CSIR experts.

The scheme is a part of the new innovative initiatives being under taken by CSIR and the Ministry of Science & Technology. Once the new scheme gets going successfully from its initial start in Jammu & Kashmir, the same will then be extended to other States and also other parts of the country as well.

The Union Cabinet Committee of Economic Affairs, chaired by the Prime Minister approved the issues relating to the under-recovery on sale of diesel and its present status. The prices of Diesel will be market determined at both Retail and Refinery Gate level.

Some experts are also of the view that the Deregulation of Diesel will not only help in controlling the fiscal deficit but also be advantageous for the consumers as they will now pay market rates for the fuel which is lower by more than Rs. 3 per litre. This will also leave more money with upstream companies for investment in the exploration and production sector, thereby enhancing our efforts for energy security for the country.

Diesel deregulation will also bring the retail network of private oil marketing companies into system. This will increase competition, benefiting the end consumer.

The government’s decision to deregulate diesel prices is a step in the right direction as it will help cut subsidies and balance the fiscal deficit in the long run. This was long overdue.

The goal is to engage men and boys as advocates and agents of change in the effort to achieve equality. When women are empowered, the whole of humanity will be benefited.

‘HeForShe’ is a global solidarity movement to end gender inequality by 2030. It is a campaign for gender equality initiated by UN Women. It aims to engage men and boys as agents of change for the achievement of gender equality and women’s rights, by encouraging them to take action against inequalities faced by women and girls. Grounded in the idea that gender equality is an issue that affects all people — socially, economically and politically — it seeks to actively involve men and boys in a movement that was originally conceived as “a struggle for women by women”.

The Union Cabinet gave its approval to India’s participation in the Chahbahar port project in Iran. This is a move that could offer significant geo-strategic advantage to India by way of smooth access to Afghanistan.

An Indian Joint Venture (JV) company will lease two fully constructed berths the port’s first phase for a period of 10 years, with an investment of $ 85.21 million within 12 months.

Located along the Makran coast in the Gulf of Oman, Chahbahar is in close proximity to the Strait of Hormuz which facilitates about 40 per cent of the world’s oil trade, and hence has significant strategic implications for India.

The road or rail link from Chahbahar would provide India the shortest access to Pashtun areas of Afghanistan, from the Nimroz province.

Not only would it allow India to gain easier access to Afghanistan and central Asia without having to depend on Pakistan, it is also being touted as India’s answer to Chinese control over Pakistan’s Gwadar port, just 76 km from Chahbahar. 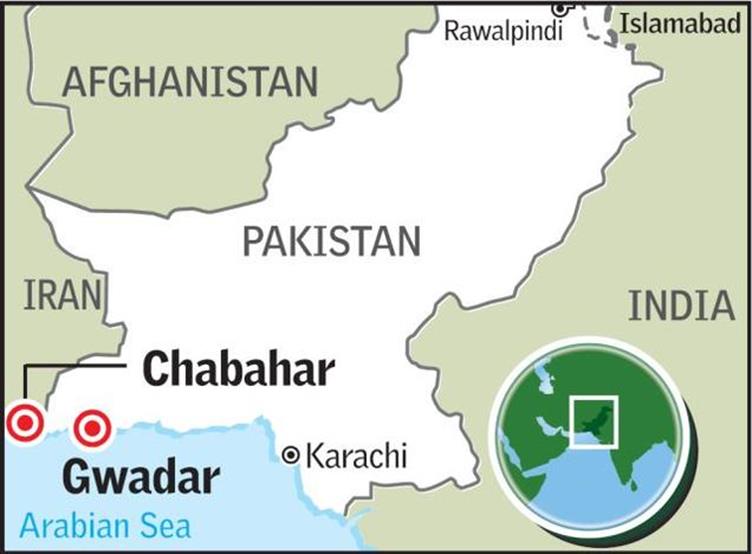