Monsoon is a familiar though a little known climatic phenomenon. In India, from agriculture to economic policies to disaster management, a lot depends on the Monsoon.

The Monsoon is a recurring event i.e. it repeats after a certain frequency of time – a year in our case. But, it may not be uniform in every period (year). There are a lot of factors which affect its duration and intensity over India.

The Monsoon is basically a result of the flow of moisture laden winds because of the variation of temperature across the Indian Ocean.

There are a number of climatic phenomena which affect it namely the Indian ocean dipole, El nino, La nina, Equatorial Indian Ocean Oscillation (EQUINOO) etc. These phenomena affect the temperature distribution over the oceans and thus affecting the direction and intensity of flow of the moisture laden winds.

There have been recent reports that El Nino may disturb the Indian Monsoon and play badly with Indian agriculture. This brings us to the discussion of the concepts of El Nino and La Nina. In what follows we will look at their origin, mechanism, impact and mitigation strategies. We need not go into trivial details but only understand them from exam point of view.

El Nino and La Nina are opposite phases of what is known as the El Niño-Southern Oscillation (ENSO) cycle. The ENSO cycle is a scientific term that describes the fluctuations in temperature between the ocean and atmosphere in the east-central
Equatorial Pacific. (The area between South America and Australia near the equator – look at the diagram) 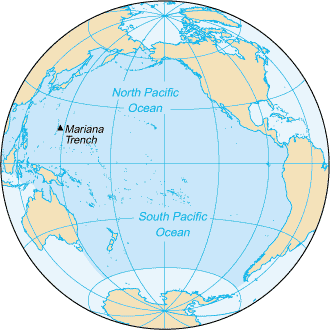 La Nina is sometimes referred to as the cold phase of ENSO and El Nino as the warm phase of ENSO. These deviations from normal surface temperatures can have large-scale impacts not only on ocean processes, but also on global weather and climate, including India.

NOW, it is important to understand how these phenomena affect the Monsoon system? To know this, we must first know the pressure and temperature distribution in the region before their onset. (We are assuming here that you are a little bit familiar with the phenomenon of Monsoon.)

For a normal monsoon season, the pressure distribution is as such:

This facilitates the movement of monsoon winds from the sea to the Indian land without any significant diversion.

But if for some reason this normal distribution is affected, then there is a change in the way trade winds (or monsoon winds) would blow.

However, the following is the pressure and temperature distribution in an El-Nino situation. 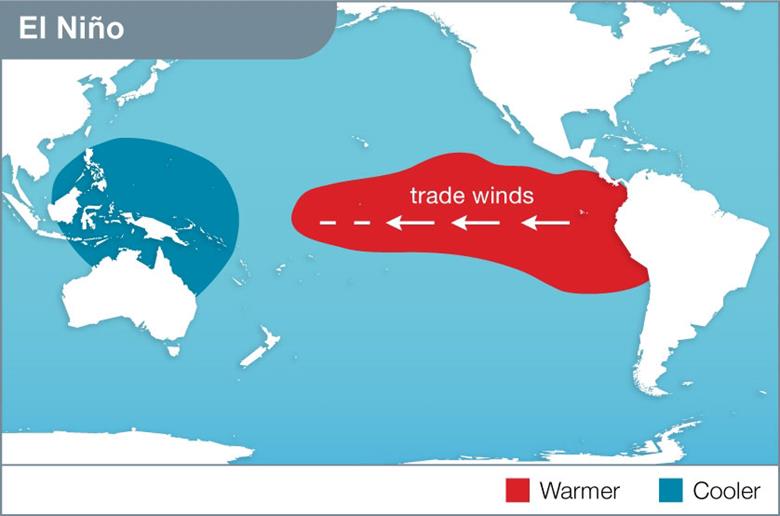 This is because of the following reasons (and its effects):

Off the coast of Peru (read in Eastern Pacific and Central Pacific), there is normally cool surface water because of the cold Peruvian current. But El Niño makes it go warm.

When the water becomes warm, the tread winds, which otherwise flow from East to west, either reverse their direction or get lost.

Due to this warm water, the air gets up and surface air pressure above Eastern Pacific gets down. On the other hand, the waters cool off in western pacific and off Asia. This leads to rise in surface pressure over the Indian Ocean, Indonesia, and Australia.

Now as the pressure over the Peruvian coast reduces because of the warm sea water, the flow of moisture laden winds is directed to the Peruvian coasts from the western pacific (the areas near North Australia and South-east Asia – refer to the diagrams above).

Hence, the moisture laden winds that should have moved towards the Indian coast now move towards the Peruvian coast.

The warm water causes lots of clouds getting formed in that area, causing heavy rains in Peruvian desert during El Niño years.

This robs the Indian subcontinent of its share in the Monsoon rains. The greater the temperature and pressure difference, the greater would be the shortage in the rainfall in India.

La Niña, “anti-El Niño” or simply “a cold event” is the cooling of water in the Eastern Pacific Ocean.

The following happens in La-Nina:

The water in Eastern Pacific, which is otherwise cool; gets colder than normal. There is no reversal of the trade winds but it causes strong high pressure over the eastern equatorial Pacific.

On the other hand, low pressure is caused over Western Pacific and Off Asia.

This has so far caused the following major effects: Drought in Ecuador and Peru. Low temperature, High Pressure in Eastern Pacific.

For India, an El Niño is often a cause for concern because of its adverse impact on the south-west monsoon; this happened in 2009. A La Niña, on the other hand, is often beneficial for the monsoon, especially in the latter half. The La Niña that appeared in the Pacific in 2010 probably helped 2010’s south-west monsoon end on a favorable note. However, it also contributed to the deluge in Australia, which resulted in one of that country’s worst natural disasters with large parts of Queensland either under water from floods of unusual proportions or being battered by tropical cyclones.

El Nino and La Nina episodes typically last nine to 12 months, but some prolonged events may last for years. They often begin to form between June and August, reach peak strength between December and April, and then decay between May and July of the following year. While their periodicity can be quite irregular, El Nino and La Nina events occur about every three to five years. Typically, El Nino occurs more frequently than La Nina.

Correlation of El-Nino, La- Nina and drought in the Indian Landscape

“Looking at the relation between El Nino and Indian droughts since 1950, it is observed that India faced 13 droughts and 10 of these were in El Nino years and one in a La Nina year. This indicates there may not be a one-to-one correspondence between El Nino and Indian droughts,” the paper by Ashok Gulati and Shweta Saini of Indian Council for Research on International Economic Relations (ICRIER) has stated.

The paper also stated that as El Nino phenomenon may hit in the second half of the monsoon season in 2014, factors such as favourable water reservoir levels, and high stocks of grains with the government may offer relief to farmers and consumers.

This leads to a lot of undesirable circumstances.

Shortages in food supply then result in spike in food prices all across the country pushing inflation up. High food inflation eats into other sectors too such as food processing sector.

This pushes the RBI and the government to adopt a more cautious approach to monetary and fiscal policy respectively.

A tighter monetary policy to tame food inflation may affect the economic growth rate of the nation. Besides, lower agricultural production already lower the GDP of the nation dealing a double blow.

What is the WAY OUT?

Model questions for Prelims and Mains

1. El-nino is caused due to the occurrence of a warm current off the coast of Peru.

2. La-Nina is caused due to the occurrence of a cold current off the coast of Australia.

Which of these is/are true?

2. Which of the following sectors can possibly be affected by the onset of El-nino?

Choose the correct answer using the codes below:

3. The event El-nino can change the normal direction of the trade winds in Central pacific ocean.

Which of these is/are true?

1. Discuss the mechanism of El-nino and establish its effect on the Indian agriculture in general. (200 words)

2. In view of El-Nino, what immediate and long term steps can be taken by government at the state and local levels? (200 words)

3. “Better management of the Public Distribution System (PDS) can mitigate the impact of El-Nino on the Indian economy.” Elucidate. (200 words)