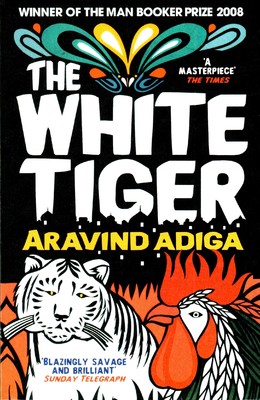 Aravind Adiga won the Booker Prize in 2008 for writing the book ‘The White Tiger‘. I was always curious to know what was in it, and how this first-time fiction won the prestigious award. Once I started reading the book, I discovered it was un-putdownable! Written in an angry rustic tone with a lot of dark humour and satire, the author convincingly tells the tale of ‘The White Tiger’, an entrepreneur in the IT hub of Bangalore in a most unimaginably creative manner- the entrepreneur speaks in the first person and narrates his story in letters written every night addressed to none other than- Wen Jiabao- the then Premier of China! The interesting title, ‘The White Tiger‘, literally means that rare ‘creature born once in a generation‘-a name given to the street-smart protagonist when he answered all questions rightly, posed to him, by the school inspector in a remote village of Bihar.
The entrepreneur comes from the ‘Darkness‘ (referring to rural India) and initially simply aspires to be a bus conductor, attracted by the latter’s uniform, power to line up people and fair salary! However, he later has to drop out of school and work in a tea-shop, where he develops the most important trait of any budding entrepreneur- to eavesdrop on people’s conversations. He proudly proclaims time and again in the book, that his education has been due to listening to people’s talks on streets. Thus, he chucks his previous dreams to rather become a driver and earn more money, respect and a fast ticket to the ‘Light‘ (upwardly mobile, urban India). He drives for one of the three village landlords and soon works his way up in the hierarchy among the already present servants there by hook and crook. Interestingly, Adiga uses animal names to address the landlords in the narration, showing complete disdain by the protagonist towards the exploitative rich landlords. He also openly portrays all the corruption prevalent in villages, related to elections and daily affairs. ‘The Great Socialist‘ looms as a mystery political figure in the book. Is it referring to Laloo in a veiled manner (setting is Bihar and in Page 97 he writes-“Now, The Great Socialist had been the boss of the Darkness for a decade at the time of this election.”) or is it just a symbolism to reject socialism for capitalism of New India and convey utter disregard for socialist acts (read giveaways) practised by political parties to gather votes? Probably both.Actually, he uses symbolism effectively throughout the book. From the chandelier hanging above him as he writes the letters, to the ‘Great Rooster Coop‘ which he had to flee, to the roads of Delhi and Bangalore which spoke to him (he was a driver) and to which he had to listen to be successful, Adiga weaves compelling imagery to drive home the ideas and desperation of the entrepreneur, and through 321 pages narrates how a simple village lad evolves into a cruel, uncaring (forgets his Granny and extended family), greedy, corrupt man who was finally driven to slit his master’s throat and run away with seven lakh rupees from Delhi to Bangalore taking a round-about route so that the police could not catch him. Then he ‘listens to the roads of Bangalore’ and to the conversing people there who are talking of nothing except outsourcing. Of course they would need cabs to drive them to and from offices at unearthly hours, and that is how he starts his own company- “The White Tiger Technology Drivers” by bribing his way through and building the needed contacts.
This is a tell-all tale about the deep under-belly of corruption in India, and how a dream rags-to-riches story is possible here by throwing ethics down the drain. Yet, Adiga writes so compellingly and frankly that at points I even sympathised with the ‘murderer’ protagonist! Especially when he describes how people like the landlords annihilate a disloyal servant’s entire families in the village, ‘The Great Socialist’ (representing corrupt politicians) himself engineering hundreds of such crimes and the worthlessness of a life here- like that of an ant.
There are a myriad insights about caste system, common man, politics, democracy, police, prostitution (especially the ‘Nepalese’ and ‘golden-haired’ ones at a premium), servant-master relationship (‘colonial mindset’ essay, yes!) all told from a very rustic perspective, to none other than- don’t forget- the Premier of China! Infact, the satire kicks in here. Describing various respective Indian aspects, he seriously yet (for readers) humorously asks at various points in the book to the Premier- Are Chinese servants organised? Brand of Chinese liquor? Servant quarters in China? ‘Great Rooster Coop‘ exists in China? He even invites the Premier to ‘make a killing‘ in the real estate sector of Bangalore! Also advises him to make Yoga a must in Chinese schools, as he has personally benefited from it! Also, on more than one occasion, I got a feeling he’s somewhat jeering at the Chinese in a subtle way (Excerpt from the book: “Servants, incidentally, are obsessed with being called ‘Sir’ by other servants,Sir.”)!
A few of the many brilliant concepts I loved in the book:
a) Adiga describes two puddles of water talking to each other- one each from the ‘Darkness’ and ‘Light’. Highly creative. A different plane altogether.
b) Defines Switzerland as “a small beautiful country in Europe full of white people and black money“. Never thought that way!
c) Page 64: “In the old days there were one thousand castes and destinies in India. These days, there are just two castes: Men with Big Bellies, and Men with Small Bellies.

And only two destinies: eat- or get eaten up.”  Hard-hitting, yet brilliant. Isn’t it?! Read the book to find such outstanding wise-cracks almost in every paragraph!
However, one fact Adiga gets wrong over and over in the book, is when he writes Hindus have 36 million Gods. We actually have 33 Crore Gods and Goddesses (330 million of them!). Also some of the data remains dated, as India has moved on. Otherwise, the book remains contemporary and relevant by portraying the rise of the entrepreneur-‘The White Tiger’, who reveals to the Chinese Premier at the end that he is all set to become a serial entrepreneur (bored of the cab business!) and though law may one day catch up with him, he relishes that he has become ‘one of those who cannot be caught in India’.
A fascinating read with deep insights. Don’t miss it!
MENUMENU