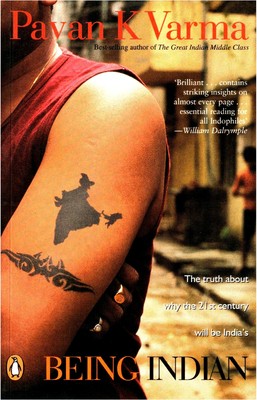 We are Indian. Still, have we ever tried to analyze those fundamental traits which make us so?  Those compelling characteristics of our society and life as Indians, which refuse to leave us even in the farthest foreign lands? Pavan K.Varma, a seasoned Indian diplomat, gives an insightful and delightful analysis through his book ‘Being Indian’, on what makes Indians operate within and outside the chaotic democracy of a billion plus people, and why the 21st century will be India’s, precisely due to those very same fundamental characteristics of Indians ingrained in their DNA.

This fantastic read consists of 213 pages, excluding Notes (consisting of an elaborate list of books/articles by established authors, leaders, administrators etc. referred for writing each chapter), Copyright Acknowledgements and Index. It is divided into six chapters starting with ‘Introduction’ where he tries to separate the reality from the image of India. He highlights what questions the book seeks to answer, methodology followed and basic traits of Indians such as retaining hope even in the toughest circumstances and resilience that comes due to continuous exposure to adversity, to name a few. Then through the next chapters i.e. ‘Power’, ‘Wealth’, ‘Technology’, ‘Pan-Indianness’, the author goes on to unpeel layer-by-layer the Indian psyche and how they tick and succeed. Finally in the ‘Epilogue’ the author suggests what needs to be done to unleash the potential of Indians so that the 21stcentury certainly and much faster, becomes India’s.

While reading the chapters, I felt that I wish I had read this book before my Essay exam, for this book elaborately discusses on how far colonial mindset holds back Indians and whether this will continue into the future. Several points I’ve written in my Essay match with those given here too, yet the examples and points are myriad in the book and one who reads this can really write an outstanding  essay on the ‘colonial mindset’ topic. Again ‘We Indians are Hypocrites’ topic (in English Compulsory Paper 2013) is also amply talked about in various parts of the book. ‘Science versus Mysticism’ is another topic which came to my mind particularly while reading the ‘Technology’ chapter. Insights into ‘Ethics and Morality’ is sprinkled abundantly throughout the book as examples from religion and life abound. In this way, especially CSE aspirants can very well relate to the book, though it is aimed at understanding Indians by both foreigners and Indians themselves.

At a place or two, the book contains wrong information (Puri being on the western side of India etc.), apart from which it is well-researched. As it was published in 2004, it contains a decade-old data but still ideas are contemporary as it tracks the rise of India, especially after liberalization. Entrepreneurship being in the genes of Indians is amply illustrated especially in ‘Wealth’ chapter, which sadly was somewhat thwarted by the British creating a ‘clerk’ class and still the tide of entrepreneurship never died down. I love the way the author weds history, religion (especially Hinduism, as dominant people are Hindus but traits are pan-Indian irrespective of religion) and culture with every modern facet of present-day Indians. Notable excerpt– “Perhaps Indians are a sui-generis people. They cannot be color-coded for convenience into white, black or yellow. They do not belong to the Christian world. They cannot be included in the Islamic…They cannot easily fit into a mould. They are not post-communist, nor are they pre-democratic. They are not theocrats nor are they irreligious. They are too many to be ignored, but somehow too different to be included in convenient generalizations.”

The author quotes many distinguished people throughout the book, a few of whom are Kautilya, Huntington, Fukuyama, Gunter Grass, Natwar Singh, Nehru etc. and freely gives ideas from the Vedas, Mahabharata and Ramayana. He elaborately explains how Krishna justified the ends to be more important than the means, a philosophy of relative moralism which is often used to justify everything in India from murder to corruption. Injustices (attacking Karna against the rules of war etc.) and lies disguised as truths (‘Ashwatthama is dead’) were actively encouraged by Krishna, who justified it saying these were for attaining rightful ends of Pandavas- regaining unjustly lost power.

Contrary to even my thoughts of Indians being spiritual (rather than materialistic) and non-violent, the author argues with convincing examples that how Indians can be the most violent and are the most self-centred, pragmatic, materialistic people uncaring about the poor and can wash off their sins in the Ganga even if filth is all around and can run their shops by lighting incense and praying to Goddess Laxmi even if brothels run in the floor above theirs. Focus on their own aims and stoic indifference to the environment around them as long as their ends are achieved is an over-arching feature of Indians. I had never really thought about this!

My favorite take-aways from each chapter:

1)      1) Power: Love the way how Mr.Varma derives Indians’ motivation for power; how in any interaction Indians always size up the ‘auqat’ of the other and never shy from asking intrusive questions for this; how Gandhi’s renunciation of power earned him awe but no true followers of his ideals; rule of hierarchy, status and projection of power while giving lip-service to equality; corruption and why chamchagiri, sycophancy and factionalism exist widely and so on.

2)      2) Wealth: Only shop in a remote African country is that of an Indian; Banias and businessmen pray Goddess Laxmi not as respect for her discourse on goodness but for the ends of material wealth; spirituality of Indians is a farce for in reality most Indians are deeply material- Dharma, Artha, Kama, Moksha- Artha (Wealth) is a goal of life!

3)      3) Technology: Why are Indians software coolies? Is Indians’ natural affinity for maths and logic civilizational? Is the global Indian techie ‘modern’ or still clings to traditional thoughts like marrying only within the caste? Very interesting analysis.

4)      4) Pan-Indianness: Assimilation of various cultures into Indian culture; economic gains and distribution of Indians across India; nationwide appeal of masala dosa and Tandoori Chicken; ‘Hinglish’! The author explains how due to lack of organized pressure, integrating forces worked independently of partisan biases and pan-Indianness has been emerging.

The epilogue finally outlines that due to the way Indians are, they will keep fighting for their place under the sun and this century will belong to them, as they are able to work around their problems (‘jugaad’) and reach a compromise mostly, for the common good. I thoroughly agree with the author when he says that to set India on a path of fast development, policies simply need to be made such that Indians in India are encouraged to set up private enterprises, as they work best in their personal interests. To quote from the book-“The only economic model that can work in India is a percolation of benefits pursuant to an increase in the size of the pie.” Apart from this, he suggests electoral reform, handling corruption by new policy direction, capitalizing people’s talent in knowledge industry and curbing her over-population.

All in all, this book is a MUST-READ for every CSE aspirant, and indeed, for every Indian and foreigner who wishes to understand the bigger picture on what is ‘being Indian’.