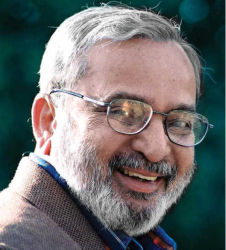 Which of your books would you recommend to a reader approaching your work for the first time?
Samskara (Samskara: A Rite For A Dead Man)

How has your nomination for the Man Booker International prize been received in your home country?

That an Indian writer writing in one of the Indian languages, Kannada – disparagingly described as “vernacular” – gets shortlisted for the Man Booker International prize is an important event. Translation into English made this possible and is also acknowledged by readers across India.

Who are your literary heroes?
My heroes in Kannada are Pampa and Kumara Vyasa, Basava (Vachana Sahitya)andAllama Prabhu from older Kannada literature, and my elder contemporaries DR Bendre, Gopalakrishna Adiga and Kota Shivaram Karanth. From the west, Tolstoy, and DH Lawrence and Camus.